Going to the beach became a lot more interesting when the Jessica Rabbit towel was released. It's colorful, high quality, and features a stunning image of Jessica.

This review will be short and sweet - because it's one of those items where literally what you see is what you get. In 2003, Jessica's introduction to the world of pin collecting began with her dressed in a bikini and grass skirt. It had become a popular look for her, and one such image went on to grace other merchandise as well. This Jessica Rabbit Fun In The Sun Beach Towel was released around 2003-2004 in Disneyland Park locations. It's among the first of the new crop of merchandise to be released in conjunction with her pins. Jessica Rabbit is decked out in Hawaiian-style garb. She has a large purple flower in her hair and purple flower lei. She's wearing a lime green bikini top and a tan grass skirt with yellow flowers. 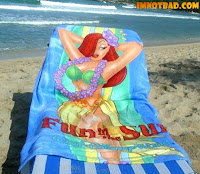 Jessica is posed in front of a teal and yellow surfboard. The background is blue water, suitable enough for a beach towel. Although I had heard some people say this was also avaliable in Disney World, I had not seen any of them with the Disney World logo printed on it until now. In this photo, you will see that the Walt Disney World logo is clearly there - making this one of the rare times the same item has the different logo appear on it for different parks. 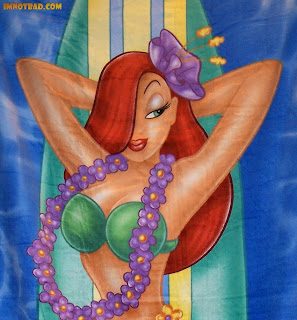 Over the years, Jessica Rabbit would often be seen with a surfboard. I don't know if this means she's an actual surfer, but with all the pins of her playing sports, she's a lot more athletic that we thought! There is a red Fun in the Sun logo at the bottom - along with Disneyland Resort in teal. It's only the second beach towel I know of to feature Jessica alone (the being offered from the Jessica's store years ago). I think we are long overdue for another one. The Fun in the Sun towel is a much more rare find now, but it does show up on eBay now and then. 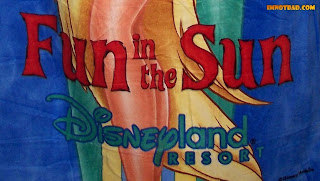 The Jessica Rabbit Fun in the Sun Beach Towel gets a 5! This is a great beach towel, high quality, and full of color.