It's been a while since we had a new Jessica Rabbit t-shirt available. When it comes to Jessica shirts, the wardrobe selection of the past is always something to remembered. With embroidered button-down shirts, and retro-style tees, if a Jessica shirt came out - it was something worth getting! This time around though, it's not our Jessica who does not deliver, it's the Disney quality. 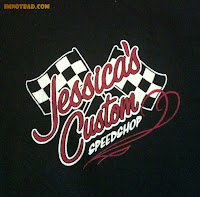 Back in February, while on my regular internet scouring, I came across a Flickr account of some recent Disney World visitors. By chance they happened to take some photos of the recent merchandise in the World of Disney Store. One such item was the new Jessica's Custom Speedshop t-shirt. It's been a while since we've had a new Jessica Rabbit shirt, I think the last one was released around the 2009 time frame. At first glance, this shirt offers everything a Jessica fan could enjoy. A nice clear image of Jessica, some new art (and some eyebrow raising art at that), it'd be hard not to like this.

The front shows a logo on the left side of the shirt for Jessica's Custom Speedshop written in front of two checkered flags. Normally her shirts had some type of pun tag line with choice innuendo - but this time around, it's not happening. The back is where the real artwork is! We still get the logo and checkered flags - but also a very interesting image of Jessica Rabbit herself. Jessica is straddling a motorcycle. At first look I didn't see how much "detail" they put into it but upon close inspection you can see that she is very much in fact straddling it with her legs to each side. The other surprising aspect here is that they didn't seem to be shy with Jessica's ample frame - and for the first time that I can remember, bring great attention to her backside. It's all shadowed and highlighted to bring the eyes right there. The image is not full color but actually a wash of red/orange tones. There is, however, a big issue I have with this shirt - and it's about the quality and price. 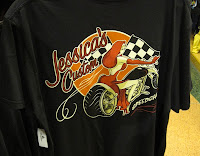 When I first found the images of this shirt on Flickr, I tried to order it directly from the World of Disney store in the Downtown Disney Marketplace. The first time I called I could tell the operator had no clue who Jessica Rabbit even was - and I was told they don't have such a shirt. I tried again about a week later and had a much friendlier operator. She called the World of Disney store to ask (which means the number you call for the store does NOT go directly to the store - but to a merchandise line) and after being on hold for a time she came back to tell me there was no type of shirt there... so said the Castmember working in the actual store. I went back to check on the images to make sure I was seeing right, and that it was in fact from the World of Disney. I was able to confirm it and called back, just by luck to get the same operator I spoke to minutes before. She asked me to email her the images and she will try to track it. I did and a week passed with no response. Upon calling the third time and getting a different operator, she was determined to track down the shirt for me - and she did. 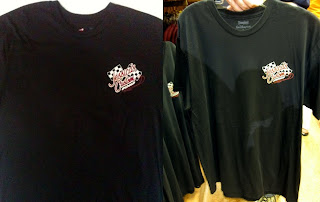 The shirt could not be found in their computer because it is not under "Jessica Rabbit," but under heavily abbreviated title, thus creating the confusion. So a Castmember at the actual store had to have knowledge of it. I was happy it was found - until the bomb was dropped that it cost $24.95! That is A LOT of money for a t-shirt, but I had not seen it on eBay and felt due to the highly risque image, it might be rare in the future. So I bought it - even with a whopping $9 shipping fee. You could imagine my utter disappointment receiving this shirt - to find it printed on a very thin, flimsy Hanes shirt. That's right - $25 for a Hanes undershirt with Jessica on it. One thing I quickly noted was that the original photo I found did NOT have a Hanes logo on the inside collar like mine did. You can see above the difference in the shirts. Mine clearly has the Hanes logo peeking out, while the other does not. While my shirt is a size medium and the other one might be larger, I don't think that would effect the Hanes logo placement. What I do think is that the original photo I saw was of shirts on their first run, and some time later Disney changed over to printing on Hanes tees. 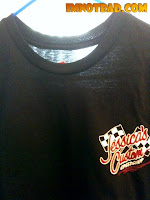 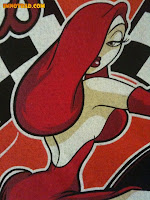 You can clearly see the thin material used for this shirt. It is without a doubt a very lightweight undershirt type of material. That is all well and good since you can also see the image of Jessica is really nicely done. The issue is price vs. quality. This is easily a $5-$10 shirt at max. I have yet to voice my opinion to Disney, and it's been so long now I don't know if I should bother - seeing as how difficult it was to even track down, what is an operator really going to do for me when I call to complain about merchandise quality? 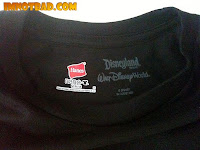 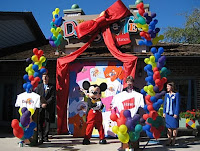 The Hanes logo really annoys me. I know Disney has the right to partner with anyone in a merchandise endeavor, but this one falls flat. Hanes is well known for their underwear - and after many high quality shirts by Disney using the Jessica character - this shirt does not mix in well at all. Disney and Hanes started a venture together in 2009 with the Design-A-Tee stores located in the Marketplace. I don't know the quality of those shirts - but it's one thing to create my OWN shirt with my name and an image of Jessica for $20 - it's another to get a widely available shirt on thin material for $25. The shirt even has a paper-y Hanes tag at the bottom of the shirt. I have Hanes - I wear Hanes - never had I uttered the word Hanes with such distaste before. At least Jessica looks good - and in case you do want to order it, you will need to give them the SKU #400006320537 so they can find the shirt. It is available in Disneyland and Disney World park locations. Epcot is also supposed to carry these shirts as well. 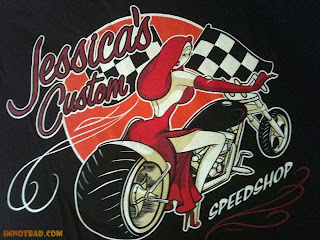 The Jessica's Custom Choppers T-Shirt (by Hanes) gets a 2 from me. At this price point, they have to be kidding. This is easily worth less than $10. I get better quality shirts at Target. The matarial is very thin and Disney's bringing in Hanes to do their work seems to cheapen their merchandising clout. I like the red tones, but look at the difference some color would have made. 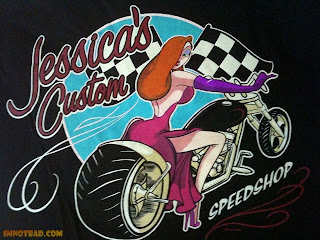