Jessica Rabbit started to become well known in pin form for many different holidays - one of the more obvious being Valentine's Day. In 2005, Walt Disney World released it's first ever Roger and Jessica Rabbit Jumbo Pin. Complete with multiple layers and glitter accents, this pin sold out in no time. 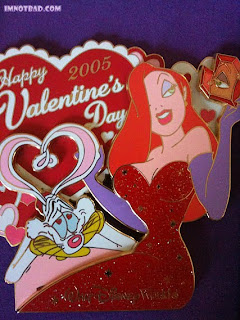 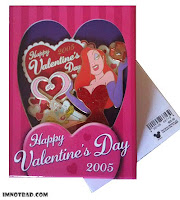 Pins were starting to become a bit more expensive by 2005. Disney Auctions was constantly releasing Limited Edition 100 pins, and the first Jessica Rabbit 6-Pin set was a huge hit. A few months later Walt Disney World released a special Roger and Jessica Rabbit Valentine's Day pin on February 7, 2005. This was no ordinary pin, it was selling for a whopping $25 each and limited to 750. 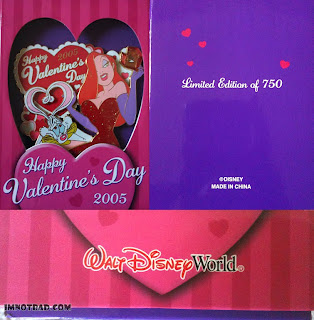 This jumbo pin was presented in a specially designed box. The front had a window cover in a heart shape so you could see the pin. It was striped in dark and light pink and there was a Happy Valentine's Day 2005 logo in a heart underneath. The Walt Disney World logo was on the box as well, and the back, in solid purple, lists the edition size with some hearts floating around.

Jessica Rabbit is well done on this pin, but if you have sharp eyes and a good memory, you will notice that her body is from the scene where shes singing to Eddie in the Ink and Pain Club, and her torso is from the end of the film when she's frisked by Greasy Weasel. Disney started to use this type of technique a lot in later years - you simply cut and paste art to make a new photo. So in a sense there really isn't any new art here. Still, she looks good and it's one of the biggest Jessica pins we've been given to date at a large 3½ inches. Some extra features is Jessica's glittered dress. Often, Disney just makes her dress red, although when it sparkled in the movie it was pinker, but it's a nice touch on this pin. She also has some glints on her dress that are the gold metal of the pin that show through, adding extra sparkle. Jessica holds a jeweled heart in her left hand that shows a shimmering reflection of her eye. 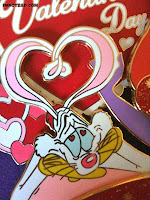 Roger, you will notice, is taken from the scene from the movie theater with Eddie - so again it's just reused art in a way. Both characters come out very well though on this pin. Adding to the extra features of this pin are the multiple layers. Jessica's body and dress are the top layer, her right arm, leg and Roger are the middle layer, and the heart background is the third layer. Again, there is the Valentine logo behind them in a heart, surrounded by other hearts - and also a Walt Disney World logo at the bottom of Jessica's dress as part of the gold pin metal.

This pin was very popular and sold out the same day of release and it can sometimes be found on eBay. At certain Disney pin events, they auction off artist proofs or variants of pins released. The Valentine 2005 pin was auctioned and was an early prototype version of the actual pin released. As stated, Jessica's dress is a different color, which seems to be a bit lighter, and it claims that the heart she is holding is also different in some way. This was a one-of-a-kind and has not been seen since. 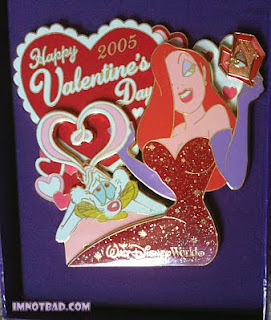 The Roger and Jessica Rabbit Valentine's Day 2005 Jumbo Pin gets a 4½. Even though it's reused art lifted right from the movie, it's a nice pin with great colors and a lot of extras with the glitter, multiple layers and box.