The Gallery of Light Collection brought to life such characters as Beauty and the Beast, Bambi, Cinderella, Mary Poppins and The Nightmare Before Christmas. A special light display in a shadow-box frame illuminates miniature characters inside - and the result stunning when you see it in person. Jessica Rabbit makes her debut as the latest creation by Robert Olszewski in this first ever Jessica light-up display. For the first time anywhere, take a look at at up-close photos, found only on this site. 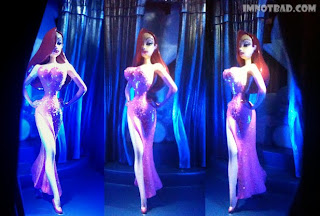 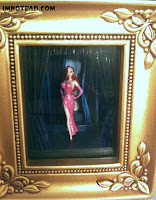 For those of you who don't know about the artist - Robert Olszewski was born Pennsylvania and started painting and drawing early on, eventually encouraged to pursue a career in art. After earning a Bachelors Degree in Art Education, he married and moved to Southern California. During his teaching career, he painted in his spare time, also making toys for his children to play with. He built a miniature dollhouse for his daughter, and his interest in miniatures turned from playful to a serious exploration - eventually making it a full time job.

After working for several companies over the years, he was commissioned by the Walt Disney Company to prototype miniatures for their Enchanted Places Program. His work continues with them today making several miniature framed light dioramas from various Disney movies like Snow White, Peter Pan, The Little Mermaid and Alice in Wonderland. Often when it comes to collections, Jessica Rabbit is left out. Over the past few years, with her rising popularity, she's beginning to show up more and more. The Jessica Rabbit Gallery of Light figure is a very fitting addition to this collection and for what this piece does, it's like getting two collectibles in one. 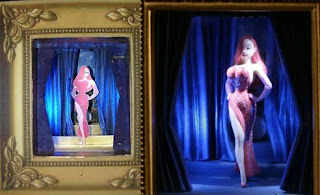 Preview images left a lot to be desired when first shown. The initial piece was not ready when first displayed at a Disneyana Event in winter of 2010. There was a paper cut-out in place of the Jessica figure, so obviously it kept you guessing on how it would actually look. The stage stairs were also a gold color at first, which would later be changed. The second image seemed complete, but the figure of Jessica Rabbit looked strange and unimpressive. Even for a miniature.

The entire piece is actually very small. They were not kidding when they said Olszewski crafted miniatures. The whole thing is less than five inches tall. The Jessica Rabbit figure inside is around two inches. That's tiny! For the amount of work and detail on this, it's worth the price. These aren't very cheap, running about $80. The final piece released does not seem to look anything like preview images, and is many times better.

On the back of the lightbox, there are Disney and Olszewski logos (no mention of Amblin again) and the name of the piece, "I'm not bad. I'm just drawn that way." It states that it's an open edition piece, so you should have plenty of time to save up money for it. A sturdy mount for a screw is on the back so you can hang it, or it is suitable for shelf display. These can be found at Disney Parks and also on-line at different dealers. The Art of Disney Gallery should have these, and if they have no idea what an Olszewski figure is, try asking for the better known "Gallery of Light" name. 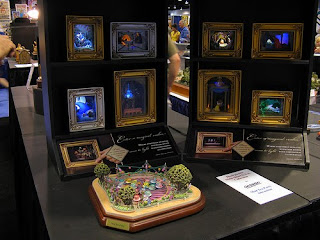 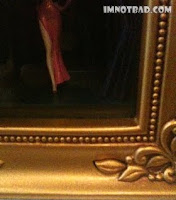 The extra feature of this piece is that it actually lights up! This is a first for a Jessica collectible, minus a few crude blinky pins released a long time ago. There are four lights hidden inside, behind the curtains. Two light-blue bulbs on the top corners and two darker blue in the center. The only drawback I see to this is that it does not appear you can change the bulbs if one breaks. I'm also not sure if they are changeable or if there is a light source hidden in the back somewhere. The whole thing takes 3 AAA batteries which are not included! They could have added them for the price I think, but once you get them in - just press the cleverly placed switch on the bottom corner that's disguised as part of the gold frame. 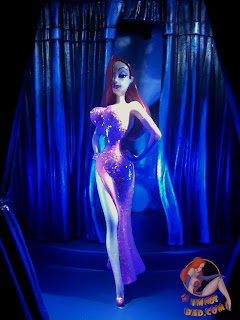 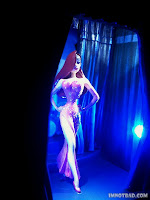 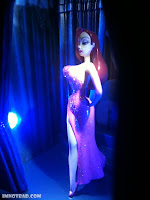 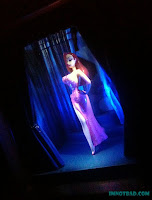 Jessica Rabbit lit up in all her glory is a sight to behold. The blue lighting does something different to the piece than regular lighting would do. It has a cartoon feel to it and almost seems real - like a living photo. When I saw pictures of the Gallery of Light figures, they looked nice - but seeing them in person makes all the difference in the world. You cannot get the right look of the figure through photos. I had to take several pictures just to capture the look as best I could - and also place my camera VERY close up to get the detailed work on this small figure. The sculpted curtains are painted in a dark and light blue, giving it a shadowed appearance. The right and left sides of the inner box are decals of blue curtains, so its not just plain when you look at it. Jessica's colors are all correct and when the light is on, the whole inside and figure reflect the glow of the lights. 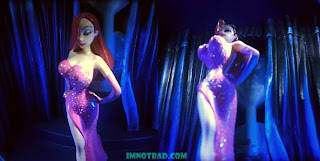 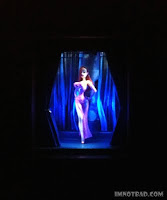 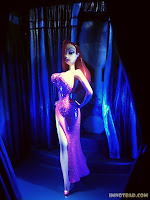 Jessica also has some glitter on her dress that glints when the light is both on and off. The blue curtains mimic her movie debut scene exactly. There is also a scene in the open portion of the curtains. You can just make out one of the crows playing the drums and part of the martini-glass stage scenery behind Jessica. This does not appear to be fully sculpted, but rather printed on a raised portion. Since you don't really see it much it does not take away from the overall effect. 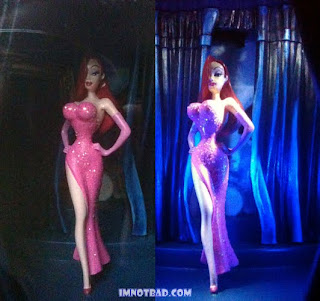 The Jessica Rabbit Gallery of Light Figure by Olszewski gets a 4. This is a great item when it's lit up and not, so it's like two things in one. It could have come with batteries, and I see no way to change the special bulbs if one goes out.