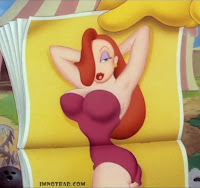 Something that is important to any fan and artist is a Character Bible. This is basically a list, story or information about a certain character that the audience usually knows, but sometimes not. Part of the Jessica Rabbit Character Bible appeared in the Roger Rabbit's Toontown comic #5 (the last of that series) which contained a small character bible on each toon. Here is the information on Jessica:

Jessica Rabbit:
Jessica tends to have a lot of self-control but inspires a lack of control in others. So it's good to put her in situations where she's the only sane person in a crazy situation. The gags about Jessica are not about her —she's never the butt of a joke— but about the ways that people react to her. A way to make her funny is to give her sly, dry or wry responses to wild events, like Mae West or Loni Andersons's character on "WKRP in Cincinnati."

Jessica had her own story in four of the five Roger Rabbit's Toontown comics:

TT #1.) Beauty on the Spot - Jessica retired from a beauty pagent but becomes a judge!

TT #2.) The Kissing Bandit - A crazy wolf is after Jessica when she visits her friend Leena Hyena.

TT #4.) Beauty Parlor Bedlam - Winnie Weasel tries to get the best of Jessica.

TT #6.)(Cancelled Before Release) That's was no Sale… That was a Steal! - Some Weasels are after Jessica. They're mean, they're ruthless, they outnumber her. She can't lose.

TeeVee Jeebies and Beauty Parlor Bedlam are in the files section. Disney's Adventures Magazine used to have a Roger Rabbit comic for a short time in the very early 90's, and many stories featured Jessica (one storiy which was on here - "Too Many Toons.") another one is Raizing Arizona in which Jessica is dressed as a cowgirl for the entire story.

Jessica Rabbit was really becoming a regular character in the comics, but sadly the Toontown comics were cancelled and Disney's Adventures Magazine discontinued use of the characters.