Some Jessica Rabbit items make you stop and scratch your head a bit. I didn't think the Jessica Character Cobbler Shoe was even legit when I first spotted it on eBay some time around 2001 during the 100 Years of Disney period. Yet, this is not only one shoe, but part of a series featuring other footwear inspired by different Disney divas. 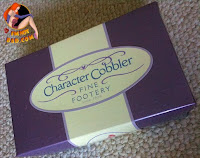 This did not seem like anything I had interest in getting. It didn't much feel like a Jessica Rabbit item to me, however the point of Character Cobbler shoes is that the footwear is made to look like something your favorite Disney character would inspire, or even wear themselves. When I saw it in person, I was not dead set on having it. However, I was shopping at gallery store in Pleasure Island (now long gone), so at least I knew it was something really made by Disney. They had it on display and it was only $20, so I bought it. 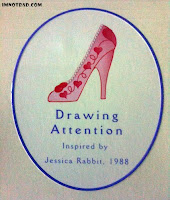 This is a rather small statue, which is pretty good if you are not into the big, expensive ones. It came in a nicely stylized light-blue box with a purple cover. The cover also shows off some nice starburst embossing. There is a Character Cobbler logo around it that can slip off, and it also shows a drawing of the shoe on the side, along with its name. This is of course the Drawing Attention shoe, inspired by Jessica Rabbit. 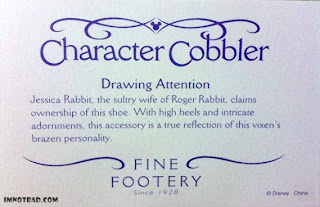 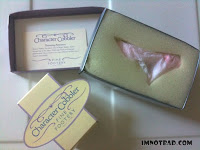 The shoe is heavily padded by styrofoam and also wrapped in tissue paper. They included a special card about the shoe, which reads: "Drawing Attention - Jessica Rabbit, the sultry wife of Roger Rabbit, claims ownership of this shoe. With high heels and intricate adornments, this accessory is a true reflection of the vixen's brazen personality." I notice that the card is not marked with Amblin along with Disney, putting it on the shorter list of such. 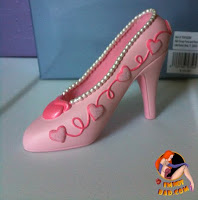 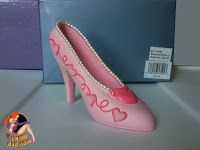 It's a fun item, but I don't think it's something for everyone. The shoe is quite girly, which isn't exactly "brazen" as the card suggests. There had to be a little something more they could have come up with, but I suppose it is still something that should look like Jessica Rabbit would wear. The shoe is pink, with a slightly darker pink on the bottom. There is dark-pink flocking inside the shoe, as well as light-pink flocking on the hearts that surround the sides of the shoe. The hearts are connected by a dark pink swirl, which is also the same color of the big, signature Jessica lips on the front of the shoe. At least this part is something recognizable to Jessica. The rim of the shoe is outlined to look like pearls. 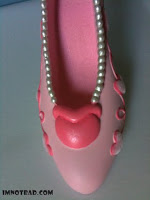 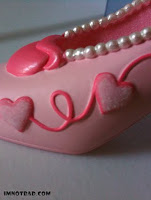 There is also writing printed on the bottom of the shoe - Character Cobbler, Drawing Attention, Inspired by Jessica Rabbit, 1988. Again there is no mention of Amblin along with the Disney logo.

The Jessica Rabbit Character Cobbler Shoe gets a 4. The sculpting is well done, the colors and paint are great and the flocking adds and extra touch. However I can't see this being enjoyed by anyone but hardcore Jessica Rabbit collectors.