Movies combining live-action and animation certainly isn't a new concept. Who Framed Roger Rabbit was arguably the first film to merge the two successfully. While we also recall classic movies like Mary Poppins and Pete's Dragon, the on-screen time humans and toons spend together is relatively short. Since Roger Rabbit, other companies have tried to follow suit, with Cool World and Space Jam still stuck in everyone's memory (the latter receiving a long-awaited sequel in 2021).

With the announcement of a Chip 'n Dale: Rescue Rangers movie, and the early rumors of it being a hybrid film, I started to get my hopes up... cautiously. Now that I have seen it, I can't express enough how thrilled, entertained and surprised I was every step of the way.

It's been a long time since the 1988 release of Who Framed Roger Rabbit, a movie that just may have had a huge impact on my life. Even today, when seeing reviewers discover the film for the first time, the reception is largely positive. It's a mix of "How did they do that?" and "That will never happen again." Naturally, there's always a "This movie was made for kids?" reaction that still irks me, because it wasn't. However, the merchandising surely was. Back then, anything with animation was considered kids stuff. How times have changed. 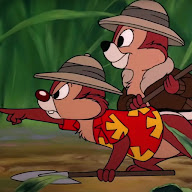 A Rescue Rangers movie was teased in 2014, with the only details being it was set for live-action. This meant that Chip and Dale were to get a CGI makeover similar to 2007's Alvin and the Chipmunks movie. This news was met with some resistance at first. Akiva Schaffer was brought on as director in 2019, after a few changes took place. The following year, The Lonely Island comedy troopmate, Andy Samberg, was brought on to voice Dale... John Mulaney was cast to voice Chip... and concerns were awakened.

A key element to the Chip and Dale characters is their squeaky voices. Naturally, skepticism arose with the casting announcement. It seemed to be heightened after the reveal for the Super Mario voice cast. The trend of using celebrities to voice very established characters drew ire from some fans. Adding onto that, the original cartoon from 1989 was part of the beloved Disney Afternoon lineup which still holds a high place with Disney fans. When the first trailer was released, the film seemed more promising. It showcased the premise of humans, toons, puppets and CGI characters living in the same world. Intrigue was further piqued in learning part of the plot focused on how Dale got CGI "surgery" while Chip remained a 2D cartoon. All that aside, the biggest surprise was seeing Roger Rabbit himself! Just his few seconds got him trending everywhere. I knew I had to see this movie in spite of any expectations.

What I witnessed had me gasping, backtracking and pearl clutching. I should warn that the following will contain spoilers, so you may not want to read on if you have not watched yet.

The movie opens with short backstory of how Chip and Dale met. I assumed the two were related, but we see them meeting in 1980's grade school. Chip even carries a retro Knight Rider lunch box. We are quickly brought up to speed on their comedy routines, acting aspirations and landing the Rescue Rangers show together. When we pull back the curtain from filming an episode - it completely takes a note from the Roger Rabbit movie. The toons work on sets with props, just like any actor would (except everything is miniaturized to match their height). 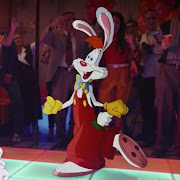 The party scene really kicked things off and set the tone. Paula Abdul and the animated MC Skat Kat from Opposites Attract were at the DJ booth, the Three Little Pigs danced on neon floors, and Roger Rabbit appears! Though Roger's cameo was short (the trailer pretty much showing the whole thing) it was sweet. I was thrilled they included him in the movie, especially with the obvious comparisons. Dale finds himself tired of being second banana and is offered his own series, much to Chip's dismay. Rescue Rangers then ends up cancelled, Dale's series doesn't get picked up, and we are thrust into present day.

Dale has undergone CGI surgery, the process remaining a mystery, and we get a look at convention life for our favorite toons. Here, they sit at booths, sell their merchandise and pose for pictures. Here, humans and toons mix together en masse dressed in costume. Here, we are treated to "Ugly" Sonic. The poor, original version of Sonic the Hedgehog that was so ill received it prompted a redesign - has his own booth and signs autographs. This wasn't my first big gasp during the movie, but the most spirited. Sonic is not owned by Disney, so to see another studio's character this deeply involved had me excited. This trend carried on with either references to or cameos by Alvin and the Chipmunks, Batman, E.T., Dobby, Loony Toons, South Park, Shrek, He-Man and many more.

The main plot centers around the kidnapping of toons, one bing the Rangers own Monterey Jack, for the use of bootlegging. The toons are altered to look terrible and made to star in knock-off versions of films. This whole movie kept me interested and in disbelieve at the intelligence and guts they took to go off in such a direction. Yes, the film consists of modern meta-humor, but the characters and source material are all respected. This was something director Schaffer said was important in securing the cameo characters.

Throughout the mystery, Chip and Dale attempt to mend their severed friendship. They are absolutely the main characters here. With Monty gone, and Gadget scarce in the meat of the movie, Mulaney and Samberg do manage to hold attention, even without the familiar sounds to the characters. It didn't need much suspension of disbelief, especially in a movie so packed with easter eggs. They are everywhere! 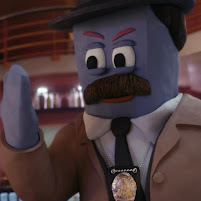 When Chip also goes missing, Dale finally turns to remaining teammates Gadget and Zipper. They are an item now. Gadget, a mouse, and Zipper, a fly - married, with children!? This was probably the most ludicrous story point. More so than the illegal cheese den or the bathhouse rap battle. "Never, ever, ever eat whale." With a few twists, turns and more cameos, things happily work out in the end and we briefly get to see the original team finally together on screen. The whole thing is capped off with creative ending credits with a side of Darkwing Duck demanding his own praise. Now that is a follow up I'd love to see.

I do have a few afterthoughts. It seems it was difficult to write a movie for the full team, but that would have been a delight to see. As mentioned, Chip and Dale take center stage over the others, something that drew concerns. As a plus, voice actor Tress MacNeille reprises her role as Gadget while Australian-born Eric Bana appropriately voices Monterey Jack. Even Zipper speaks this time, by actor Dennis Haysbert who's deep voice you'll recognize from insurance commercials. In the end Chip and the gang remain 2D cartoons, while Dale is in CGI. I found that interesting but leaving questions. 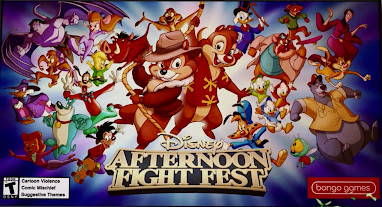 If you are a traditional animation fan like me, we haven't had anything in that realm since the CGI boom. It does make me curious where things are headed if this movie is received as well as it appears it will. Disney artists recently hinted of a possible return to traditional cartoons to IndieWire. Among the rumors are more hybrid projects. Couple that with the positive reaction to Roger Rabbit, it feels as if there is finally hope for more down the line.

It would have been nice to see a quick end-credit shot of Chip and Dale at that VIP Party with Jessica they joked about. Yes, though only a mention, Jessica Rabbit's name came out of Chip's mouth. Perhaps in a sequel? 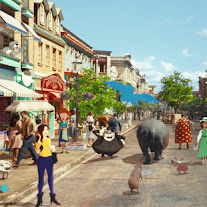 The different elements did blend well, live-action, cartoons, CGI and puppets. It was like the impossible dream brought to life. The 2D cartoons do seem to be using a newer technique or cel shading CGI. I recall the talk of a Roger Rabbit sequel and how the 2D characters and CG props never matched up correctly. They then made a test of Roger full CG, which seemed to lose the charm. Though that was years ago, I think Rescue Rangers utilized all its elements thoughtfully and correctly.

You'll need to watch this several times to catch everything. The amount of easter eggs, references, parodies and cameos can't all be seen in one viewing. This is something I completely praise the movie team for pulling off. Securing the rights to all those properties could not be easy. HOWEVER, now we know it's possible! Ugly Sonic ended up on screen after all - and may again, who knows.

With so many films trying to tug on our nostalgia heartstrings, Chip 'n Dale: Rescue Rangers does so perfectly. There were enough references and cameos - but none that were out of place to the plot, story or tone. Source material is used and revered. I would not only feel very confident in Akiva Schaffer's handling of similar movies in the future - I'm hoping for it.