How It Ranks On Disney+ 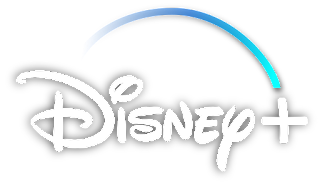 The Disney+ streaming service is ready for launch this week and the company will be offering plenty of content to keep fans busy. On October 14th their Twitter page showed all the movies and shows that will be available on day one. Each of these was sent out in a separate tweet. Not only did this make for a lengthy twitter feed, but I believe this gives Disney a chance to easily see which of these properties the fans enjoy - if the Likes are any indication. Lets take a look at the top 50 Disney Movies and Shows ranked by Likes... 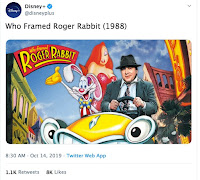 Not being as in-touch with the Disney TV shows from the late 90's and early 00's I was a little surprised to see how things ranked by Likes. One possibility is that people may not have realized Disney+ was going to tweet out EVERY single thing that would be available on launch. Some older animated classics, which were tweeted out earlier, might have gotten very lost in the shuffle once the feed became too long. Still, I wanted to see how Who Framed Roger Rabbit fared against everything else. Also, if we observe all the rumors of upcoming sequels, reboots, Live Actions movies, etc., most of the properties on this list have something coming up. Roger Rabbit is on the short list with nothing new in the works. Could that change if Disney sees what properties people enjoy? Out of these 50 properties, Roger Rabbit falls at number 32 with 8 thousand likes. Lower than I'd hoped but still up there among some very popular names that were all part of a massive tweet storm. The info below was collected October 24th and reflects the Likes seen at that time: 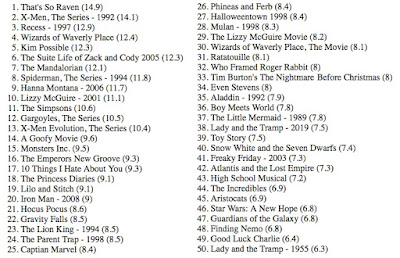 Looking at the top of the list, many are shows which featured child actors. This could make any new projects difficult as the appeal might not be there since they are adults. However, it makes sense to me now why there's something new coming for Lizzy McGuire - she's at number 10 with 11.1 thousand likes. That's So Raven is at number one overall with 14.9 thousand likes. Why Lizzy and no Raven? Raven Symoné may have turned down working with Disney+, may be busy with other projects, or might be waiting to see how the service performs. Hanna Montana came in at number 9, but Miley Cyrus had stated she was done with that character. Lizzy allows for the void to be filled in these top spot shows, but since they seem to be so popular (in terms of these Likes) I'm betting we'll see something else either from Raven, Waverly Place or Zack and Cody. 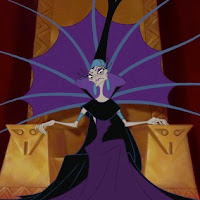 Marvel has a big presence on this list, and we know there's no shortage of projects in the works there - movies, shows and Marvel Land coming soon. Star Wars didn't seem to be as present, although The Mandalorian is at the number 7 spot with 12.1 thousand likes, and it hasn't even aired yet. As I mentioned, the animated classics are pushed way down, most are not on this list. In fact the first animated movies are A Goofy Movie and The Emperors New Groove. When talking about the Disney Renaissance period, it's The Lion King appearing first at number 23 with 8.5 thousand likes. Lion King just came off its live action reincarnation. Could we finally see more love for Yzma?

On this list, things that DO NOT have anything new in the works - other than projects with child actors for reasons I mentioned above are: Recess, Gargoyles, Gravity Falls, Phineas and Ferb, Who Framed Roger Rabbit, Aristocats and Atlantis. As you can see, most properties on here are either well represented (Lilo and Stitch, Nightmare Before Christmas, Marvel) have Live Action projects in the works (Lady and the Tramp, Snow White, Kim Possible) or have rumors attached (Hocus Pocus, Princess Diaries). Even Ratatouille has a ride coming to EPCOT in the near future.

It certainly must be noted that Who Framed Roger Rabbit is scheduled to be part ofa new Disney+ documentary series, currently titled Cinema Relics. If proven to be popular enough, could we see anything new of Roger Rabbit and co.? With Netflix in the know of what is performing well in their service, there's no doubt Disney will be utilizing their own statistics too. They will be able to see how many times a show or movie has been streamed. They'll know what is popular enough to warrant some action, and by the looks of it they were pretty aware. It will be interesting to see where things go from here.

The launch date for Disney+ is November 12th.