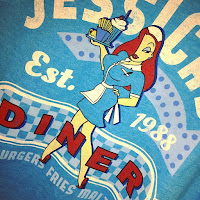 A new shirt and new look for Jessica Rabbit is now available in Disney Park locations! Jessica's Diner was recently released and spotted in both Disneyland and Walt Disney World shops. Believe it or not, there has not been a Jessica shirt released since 2014. What does this new Jessica Rabbit shirt look like? Let's examine... 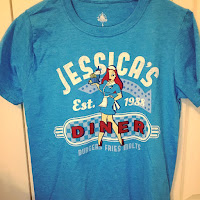 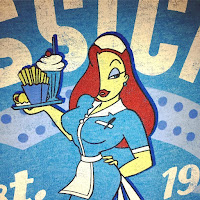 The new Jessica Rabbit Shirt, Jessica's Diner, was recently released in Disney Parks. Some have been found inside Disney California Adventure while others were spotted in the World of Disney Store in Walt Disney World's Disney Springs. The shirt color is teal blue. Jessica is walking in a pose taken from her Nurse appearance in Tummy Trouble. She's wearing a blue skirt (which is the color of the shirt fabric) with a white apron and hat while carrying a tray of food. Behind her in big white letter's is "Jessica's" with an off blue arrow below pointing down to "Diner" in red letters. To the sides of Jessica it says "Est. 1988" referencing the year Who Framed Roger Rabbit was released. At the bottom of the stylized, checkerboard "Diner" sign it says "Burgers, Fries, Malts." The printing has a bit of a distressed look. 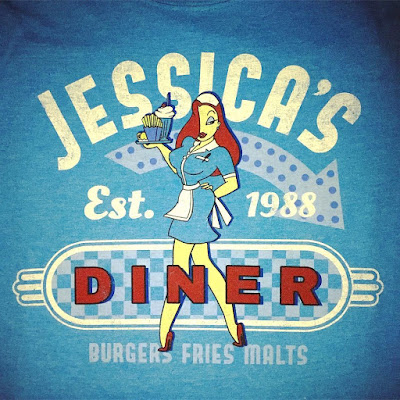 It's hard to believe there hasn't been a Jessica Rabbit shirt released since 2014 (which was only found on Disney Cruises). This is a welcome and interesting surprise. Jessica has been on motorcycles, in uniform, surfing, and now has her own Diner - if only that was a real thing! The Jessica's Diner shirt sells for $24.99 and can be found in both Disneyland and Walt Disney World areas.