The time period of the late 1980's and early 90's brought about the Disney Renaissance - with renewed interest in fairytale cartoons and new park experiences. Who Framed Roger Rabbit can be considered the beginning of this time period, but since it is not a fully animated movie it often goes to The Little Mermaid. However, Roger Rabbit is what set The Little Mermaid swimming. Who Framed Roger Rabbit brought about enough acclaim that more animated movies were put into production. With one success after another, these new characters found a home in the newly opened park... 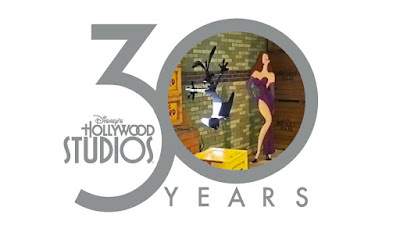 Disney-MGM Studios opened on May 1st of 1989. Thats a big 3-0 as of today. This park was unique from Epoct and Magic Kingdom, offering guests a very new experience. Its focus was that of classic Hollywood and behind the scenes movie magic. It was actually an operating movie studio and animation department. Originally, this was to be a new land in Epoct, but plans for several attractions led to this needing a space all its own. At the time of planning, Who Framed Roger Rabbit was the current Disney feature, and the new park was going to reflect this. 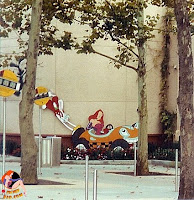 In the early days of operation a costumed Roger Rabbit was often seen walking around the parks and included in parades and shows. When you walked down Hollywood Boulevard, the shops prominently showcased Roger Rabbit merchandise. Overlooking Echo Lake was the Maroon Studios billboard. Nearby, the Hollywood and Vine Restaurant building featured windows on the second story with Roger Rabbit's shape in the window shades and the Valiant and Valiant logo. The windows and billboard still remain as of this anniversary.

The Magic of Disney Animation tour showed real animators at work on future projects. After The Studio Backlot Tram Tour (which took you through Catastrophe Canyon) you were dropped off at New York Street and Toon Park, which included the small Who Framed Roger Rabbit section. It was an interior warehouse replica of the Acme Factory filled with actual props from the movie hanging from the ceiling. Here you could take your photo with the cardboard standee of Jessica, and also get a special picture standing next to the film version of Jessica or Roger at the Foto-Toons photo shop. The Loony Bin was the store where you could buy movie related items. Standees of the weasels were also here, as well as the Toon Patrol van, a steamroller, the Dipmobile and many boxes you could open to hear different cartoon sounds.

Though the name has changed and the Roger Rabbit area is no longer present, Hollywood Studios is once again primed to be the top park with the opening of Star Wars: Galaxy's Edge later this year. The original days of the Studios was something truly magical to experience. To watch animators at work, to see backstage of a production, to get up close to props - it was always exciting to me when I got to visit.