There was a recent buzz around the internet claiming the real inspiration for Jessica Rabbit was found - former pin-up model and actress Vikki Dougan. There was a full article about this stating the real-life version of Jessica was Miss Dougan, and that her look was used to create the famous Toontown diva. Twitter was flooded with this new information, but upon checking the articles, there isn't much to back up the claim. In the past, starlets like Veronica Lake and Marilyn Monroe have been attributed to the look of Jessica Rabbit - but it was at the recent Comic-Con this past summer where Roger Rabbit producer, Don Hahn, revealed photos of actress Rita Hayworth, in her movie role Gilda, and noted that she was the real inspiration for Jessica Rabbit.

Kitsch-Slapped was the site to find the video below, where you can watch an interview with Vikki Dougan. She only mentions she was told by someone she was the inspiration for Jessica. So, needless to say this is still quite the rumor, as we've not heard anything about this in past 25 years (although it's worth mentioning it was recently revealed that actress Alyssa Milano served as the inspiration for Ariel, the Little Mermaid.) 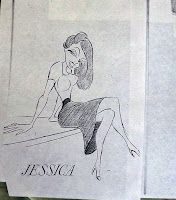 (Vikki Dougan, left, and the earliest concept art for Jessica Rabbit, right)
There was original Roger Rabbit concept art on eBay that appeared to be authentic based on all other characters, but it also revealed what may have been the very first Jessica Rabbit art ever. You can see Vikki and Jessica are quite similar from the photos. Take a look at the form and shape of Miss Dougan, she certainly has a Jessica Rabbit appeal, so anything is possible. However, the movie filmmakers themselves have always credited Rita Hayworth as Jessica Rabbit's inspiration.