Take a ride down Hollywood Blvd with the newest release in the Studios Ink and Paint Collection with Jessica and Roger Rabbit! In the new limited edition of 1000 cel, Hop In, Jessica!, Jessica Rabbit has been hand painted by the talented Studios Ink and Paint team. This release came as a complete surprise, and is the first new Jessica animation cel to be available in over 20 years. The price was a higher-end tag, and the cel came with a few extras. Does this Jessica Rabbit piece live up to expectations? Find Out! 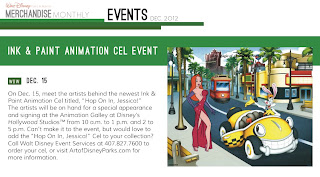 Jessica Rabbit, back in her animated glory. Could it be? Well, almost. A friend of the site sent over the information that a new Jessica piece was on the way. Surprisingly, it was an animation cel. With animated movies, the cartoon characters are hand drawn on a piece of paper. The finalized outline is then transferred to a transparent sheet of celluloid acetate (or cel for short). An artist will draw a character many times with a slight movement to their limbs or mouth. A few hundred thousand of those cels later and you have a movie like Who Framed Roger Rabbit. 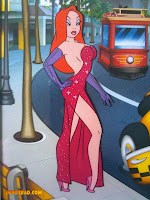 While animations cels which had been used in a feature film production have sold for thousands years ago, the going price for them has seemed to drop in the last few years. Still, if you had ever hoped to own an actual pice of the movie, this is the pinnacle in collecting (albeit, very expensive). In this age of computers, the animation cel sheet itself is not a necessity anymore, with even the 2-D cartoon characters being inked and painted right in a computer program. It's quite sad that the art is dying-out, but Disney is still keeping the tradition alive with their Ink and Paint Collection at Disney's Hollywood Studios.

Disney had re-created animation art in the past with a line of "sericels," which were high-quality copies of an image printed onto an animation cel. It was similar to silkscreening, but was done with great detail to give the art a genuine look. However, the sericels were not hand painted, and often, they did not come with any background image. The Ink and Paint Collection cels are different in that each one is painted by hand, and has some added bonuses.

An example of a Sericel, which is different from the Ink and Paint Collection
The Ink and Paint Collection dates back to 1997. Some of the more recent cels to be offered are Off To Neverland in 2008, Fantasmic! 2009, Bone Appétit in 2010 and Key To The Kingdom in 2011. Each cel had the option to come framed or unframed, and the first 750 frames purchased came with a limited edition pin. 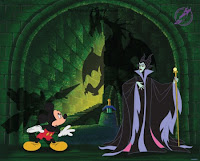 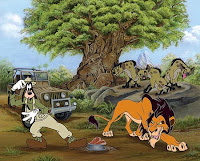 For the December 2012 release, Disney decided to feature Jessica Rabbit in the collection. A special release event was held on December 15th at Disney's Hollywood Studios where artists Erin Magill, Theodora M. DeLaney, David Rippberger, Lynn Rippberger and Sharon K. Vincent were on hand to sign specially printed postcards for the piece. Sharon Vincent shared a technique for painting the cels, called floating, where she does not touch the brush itself to the cel sheet, only the paint makes contact to the reverse side of the cel. After that, the cels are inspected to ensure each one is perfect. 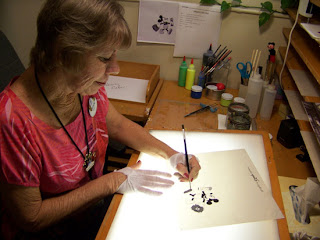 Disney Artist Sharon Vincent painting a Mickey Mouse Cel from the Ink and Paint Collection.
Photo Via Disney Parks Blog
In the case of Hop In, Jessica!, the title for the piece, it's clear that a great deal of time and artistry is put into the cel. An announcement was made of the piece, and two slightly different images appeared, making it unclear as to exactly how the final artwork would look. The first image showed Jessica with some "sparkle" dots added to her dress, a highlight on her lower lip, and The Magic of Disney Animation logo above. The second showed her without that, no sparkle dots or highlight, and with her dress a slightly different color - however, it was a much more crisp and clean image. 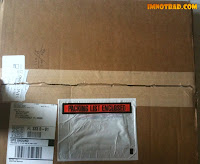 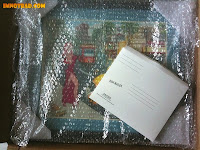 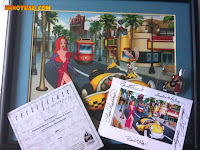 It was shipped through UPS and came packaged pretty securely. The postcard, pin, and certificate of authenticity were sealed in a separate envelope in the box. The whole piece was wrapped in a plastic bag, the corners covered, and then wrapped in bubble wrap. The certificate of authenticity was standard. Grey stylized Mickey icons were in the background. It had the name of the piece, the artists, the edition size, and listed if there were any Artist Proofs - of which there are none for this cel. The reverse side of the card was shiny black, with a silver foil castle and logo for The Art of Disney Theme Parks. 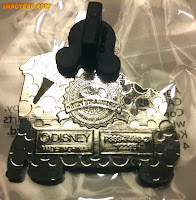 The pin which came with the pice is a limited edition of 750, and was not included with the unframed cel. You could option for the pin to be framed with the cel, or included separate. This pin is separate, and the back is stamped with the 2012 Pin Trading logo, and also a serial number of some sort. The background is Mickey heads, which are added in an effort to cut down on unauthorized and counterfeit pins. The pin metal is silver and has one Micky icon holder. The pin comes in a small plastic bag, not on a Disney card. The pin is of Jessica Rabbit sitting on the back end of Benny The Cab. 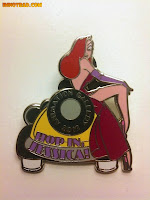 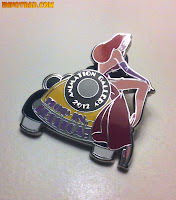 It's a sitting pose we have seen many times before used for Jessica pins, but seeing other pins that have been released along with a cel in the past, this pin is done fairly well. The "Hop In, Jessica!" logo is in purple at the bottom bumper. Around Benny the Cab's spare tire reads "Animation Gallery 2012." 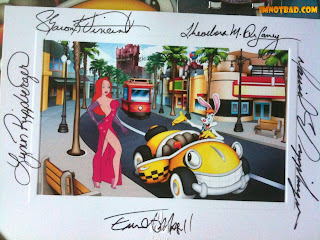 The pice also comes with a postcard, which you could have framed or separate as well. The card is signed by the artists - Erin Magill, Theodora M. DeLaney, David Rippberger, Lynn Rippberger and Sharon K. Vincent. The back of it is a standard postcard with space to write and the Disney logos. The front has all the actual signatures of the artists around the borders. The picture on it is the same as the cel. The printing is good but it's not the best it could be I think. 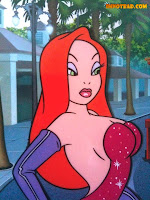 Finally, onto the cel. The cel portion of this IS Jessica, the rest is background art. The final piece does include the highlights and sparkle dots to Jessica's dress. She is beautifully drawn and with all her correct colors, straight from the movie. While this is obviously not an animation cel used in the film, it's still worth every penny, and is a great example of animation cel art. The black lines are clean. The paint is applied very well. It is amazing to see it in person and know that it was painted by hand. From the small white lines in her gloves, to her high heeled shoes - Jessica Rabbit is recreated wonderfully. I will say her face seems to be a bit fresher, updated, princess-ized. I don't know the word for it, but it is altered... and the look is still very nice. We do see both of her eyes here, but she still has all the right curves. It's great to see they didn't shy away from giving her some kind of effect to her dress. It adds more to it than if it had been painted one flat color. The dots are a mix of white and light pink. 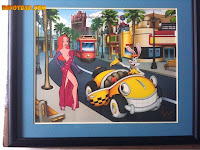 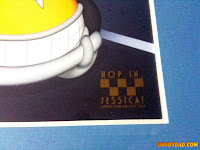 The background art is the palm tree lined streets of Hollywood Boulevard in Disney's Hollywood Studios. The Tower of Terror ominously looms in the far end. A Red Car Trolley car is approaching from around the corner. Roger Rabbit is there with Benny the Cab waiting to give Jessica a lift - Hop In, Jessica! The background art is also very well done. Even though Roger and Benny are not part of the cel, it still mixes together well enough. It highlights Jessica as the cel portion, and is still very complimentary as great background artwork. 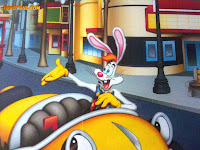 The whole pice is bordered with a light blue mat board, and depending on how you bought it, either framed in black, gold, or neither. The black frame and blue mat suit the pice really well. It's full of life and color. There is even a gold foil logo stamped onto the bottom right corner of the cel. This pice delivers on so many different levels. It's great for collectors, especially those who couldn't afford original animation cels. It's made for both Roger and Jessica Rabbit fans, with both of them a focus of the pice. It's perfect for any lovers of classic animation artwork. 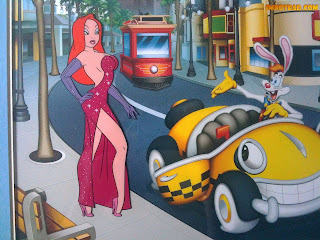 The Hop In,Jessica! Animation Cel gets a 5! This IS Jessica Rabbit art. The pin and signed postcards were great additions - but the cel itself is fantastic!