The Walt Disney Classics Collection line is one of the higher-end collectibles available, and by now almost every Disney character has be immortalized with a statue. Jessica Rabbit has made two appearances, the first being entitled "Dear Jessica, How Do I Love Thee?" which also featured Roger as well. At long last, up for review now - as voted on by the readers of the site, is the stand-alone Jessica Rabbit Classics Collection Statue "I'm Not Bad, I'm Just Drawn That Way." 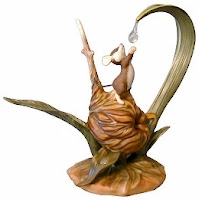 It all started with a Field Mouse statue, released back in 1992. The Walt Disney Classics Collection celebrates its 20th Anniversary this year. It has been going strong all this time with characters like Mickey, Buzz, Stitch, Tinker Bell, Nightmare Before Christmas, Lion King, The Haunted Mansion, Small World, Snow White, Peter Pan, Beauty and the Beast - and of course, Who Framed Roger Rabbit. The first WDCC Roger and Jessica piece, "Dear Jessica, How Do I Love Thee," was released in 1999, and "I'm Not Bad, I'm Just Drawn That Way" was released in 2004. Both statues are sculpted by Kent Melton, and are a great example of what a high-end Disney collectible should be.

When photos surfaced of the piece, it certainly got everyones attention. It became enough of a buzz that Disney had a special release event scheduled for the statue on March 26 - 28 of 2004. The "event" itself was not really so much more than the statue becoming available, but there were some postcards, posters, and also a special engraved crystal door prop available by Arribas Brothers for sale in Downtown Disneyland at the time of release. The door is etched with Jessica Rabbit's name in a star, and a kiss below on the top panel. The bottom panel of the door has the event date and details, and the Disneyland logo. 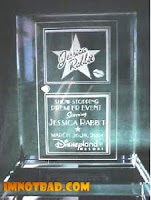 Packaging can mean everything, especially with such an expensive and fragile collectible such as the delicate pieces in this line. Disney has a signature box for the classics collection series. The teal colored box with lighter pinstripes is quite well made and sturdy. There is the Walt Disney Classics Collection logo on the front, embossed with gold, and a photo of the piece on the side. The statue inside is very well packaged by styrofoam, cardboard and paper. The statue itself is wrapped in plastic and again in foam. In the box you will find a booklet about the WDCC collection, a warning paper about how fragile the piece is, and your certificate of authenticity. 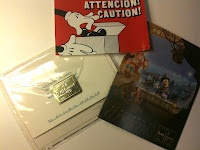 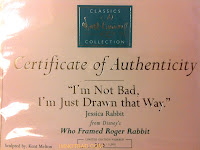 Standing at nine inches tall, the Jessica WDCC statue is a little different than the first in that Jessica is standing - the first piece had her knelt down and mostly covered up by Roger. This statue is straight from her debut scene, just as she stepped out fully from behind the Ink and Paint Club curtains. You will instantly notice the pink glitter details adorning Jessica's dress. With the Classics Collection line, Disney makes sure to be as scene specific as possible. While that rules out reasoning for Jessica's dress to be glittered for the first WDCC statue, it is definitely scene specific here, and works beautifully. The glitter is a mix of light and dark pinks - but there is also some blue glitter scattered very evenly as well. I'm not sure what the blue element adds to it but upon close inspection, it is very noticeable.

That does not take away from the beauty of the piece at all - and out of all the glittered Jessica statues out there, this one has glitter that REALLY stays in place. I have not seen any stray glitter falling off from mine, even when handling it.

The face of the statue is just a tad off model if you ask me. Which is weird since it was sculpted by the same person who mad the first statue - and that one had an excellent face likeness of Jessica. It appears the look has been softened a little bit for this piece, but the look is still very nice. Jessica has her deep orange hair, heavy eyelid, and long purple gloves. The colors here are all accurate - as they should be. Disney put the effort in these statues to match that of the paint colors on screen. They even made sure to include a gold painted earring. 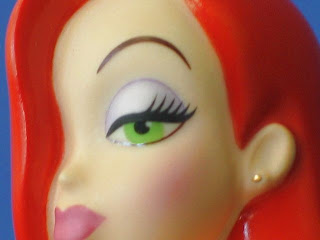 Aside from the glittered dress and earring, there are also other details, or rather "plussing" as Disney calls it, added to the statue that you don't even see. If you wondered how a statue with tiny details could even survive without breakage, the Jessica WDCC statue is plussed with bronze shoes, making her sturdy and secure to the base. 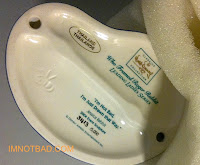 She's standing on a purple base which is an odd kidney shape, but it seems to stand up fairly well without any issues. On the bottom of the base you will find your statue information printed, along with some other details. It's stamped with the Classics Collection logo in teal and gold, the title of the movie the character is from, and the series it is in. Jessica Rabbit happened to be the first statue in the Leading Ladies Series. It also has the title of the piece, "I'm Not Bad, I'm Just Drawn That Way," Jessica's name, and the edition size. This statue was a Limited Edition of 5,000 and even with that high of a number, the state sold very well. There is also a special production mark stamped in the piece. The 2004 mark was the bumblebee from the 'Bumble Boogie' section of the 1948 animated classic 'Melody Time.' Each statue carries the mark of the production time period of that year. Statues made more over time would have a different mark of whatever year it was made. 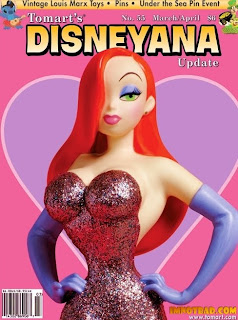 The Jessica Rabbit WDCC statue was so anticipated that it even graced the cover of Tomart's Disneyana Magazine issue #55, with the poster ad inside about the event. Upon release, the statues sold for $150 each. They can be found on eBay fairly often, though for a time they were really hard to come by. Now prices can vary in the upper $200 - $400 range. 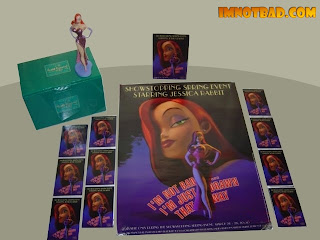 The Walt Disney Classics Collection I'm Not Bad, I'm Just Drawn That Way Leading Ladies Jessica Rabbit Statue gets a 4½. Though the face is slightly off, the details and craftsmen ship are hard to deny in this piece. Secure glitter, matching colors, wonderful pose, and well made.
Video Review