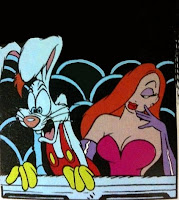 With news of Roger Rabbit making a mighty comeback to the big screen in 3D circling the internet, I had to step back and see where this information was coming from.

Showbiz411 reported from the premiere of Robert Zemeckis' new film Flight that our Who Framed Roger Rabbit director was still on board for the sequel - even though Bob Hoskins had retired - stating, “I have a script at Disney, and we’re just waiting for all the executive changes to settle down there.”

Zemeckis is referring to Alan Horn (former President of Warner Brothers Entertainment) now stepping in as chairman of Disney, and there was also much talk of that move being a possible huge plus for the Disney company.

NME.com picked up on the Roger sequel news two days later, reposting the information supplied by Showbiz411 - but went on to add that Disney was planning to rerelease Roger Rabbit in 3D for November 2013. After that, other sites began reposting these combined stories. NME does not state where they got wind of the Roger 3D rerelease, but this information was not stated by Robert Zemeckis or in the original Showbiz411 article.

ImNotBad.com was granted an interview with Roger Rabbit creator Gary Wolf some time ago, and I contacted him to see if there was any validity to this rumor. He said he could NOT confirm the rerelease of Roger Rabbit in 3D on his end, and that he had been hearing rumors of that and the sequel for "quite some time." He would love to see Roger and 3D and thinks it would be a logical move.

So, until there is an actual announcement from Disney, we still have to keep our fingers crossed. Maybe if it creates enough of a buzz, Disney will go ahead with Roger in 3D even if they weren't planning on it.