Jessica Rabbit saw a very sudden increase in popularity just as the pin collecting and trading hobby was really getting underway. A scarce amount of Roger Rabbit merchandise was released between 1989 - 2003, a Baseball Jersey, Snowglobes, Christmas Ornaments, a Classics Collection Statue, and the Mattel Jessica doll are on that short list. A change was about to occur which would make Jessica one of the most popular characters for Disney - in pin form! 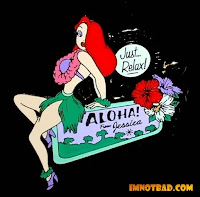 In 1999, Disney released its Countdown to the Millennium pin series in Disney Stores. One hundred and one pins were released between September and December in celebration of the Millennium - and all the Disney movies that came before it. Pin collecting soared after this release, and soon, Disney was making many more pins of varying characters, using colorful and creative designs. One such pin being Aloha! from Jessica. It was release on January 19, 2003 in Disneyland's California Adventure - which surprised everyone, and from reports on that day, the pin sold out within hours. It is a limited edition of 1500 and originally sold for $8.95 each.

Not only was it a big surprise to see Jessica, but how she was dressed is another shock. Jessica is dressed in a purple bikini top and short grass skirt. This was quite a departure from her usual dress. Jessica and the logo were surrounded by a black border. The slogan next to Jessica reads, Guaranteed Fun - Just Relax! Below that are purple, red and yellow tropical flowers. Jessica sits atop a sign with a purple sky and palm trees, which reads - Aloha! From Jessica. This was a great "reintroduction" for people to the Jessica Rabbit character. Her name being on the pin was a good reminder to anyone who may have forgotten the character, and it was nice to see Disney stretch itself in terms of design and how they were going to portray Jessica. Rumor had always been that Jessica was a little too hot for Disney to merchandise. I don't recall if someone working in Disney told me that, or it was something I convinced myself to believe. Either way there is no denying that, until the release of this pin, Jessica was rarely ever merchandised.

After this release, more pins followed - and more, and more and more. This pin design even was on a bucket-style hat, which I have to say is extremely rare, having myself only seen it on eBay once when it was initially released. I don't know much about the hat, or if the design went on to be a shirt (as Disney often did with Jessica pin designs at that time). It does appear to be an official Disney item by looking at the design, with some changes. It's not easy to see but the colors are different, there is some writing on the other side of Jessica, and it appears her bikini top was changed. This is the only photo I have of it. The Aloha! From Jessica pin is quite important, as it marks the official beginning to the real Golden Age of Jessica Rabbit collecting. 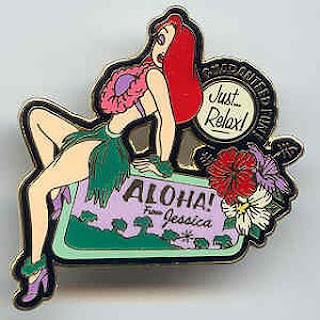 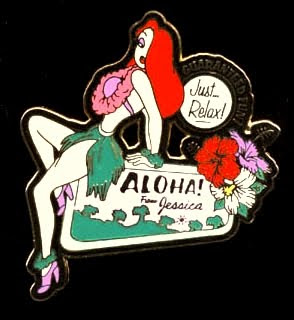 The Aloha! From Jessica gets a 4½. It's the first real pin of the Disney Trading era and marked the start of a whole array of Jessica pin madness to follow.