When it comes to Jessica Rabbit merchandise that I have NOT seen - the list is very short. While I certainly have an extensive collection myself, I don't own everything. Until a few days ago I thought I had pretty much seen it all - until I saw the Roger and Jessica Rabbit Pencil Sharpeners from Japan. 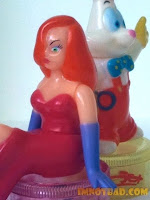 At first I thought these might be something newly released. I have never seen them before at all. Upon closer inspection I saw what looked like a backstamp on Jessica with 1987. The other thing that made me realize they were older is the handcuff around Roger's wrist. When Who Framed Roger Rabbit was first released, the handcuffs were often seen as part of the logo, or on Roger, from the memorable scene where he cuffs himself to Eddie Valiant. The handcuffs were quickly dropped from merchandise and promo materials without any reason. 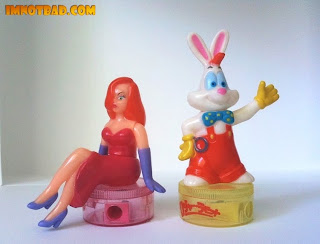 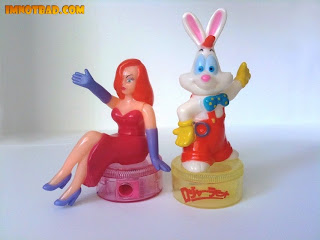 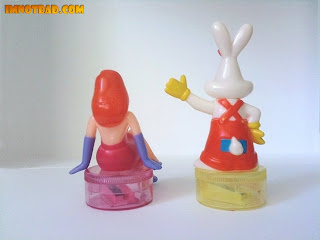 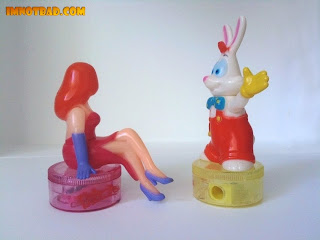 When I finally got them, both sharpeners were stamped on the back with 1987 and were indeed part of the original merchandise run just before the movie was released. Whoever previously owned them took extremely good care of them. The paint was not worn, the original sticker's were on the bottom, and they definitely had not been used. Each sharpener is a different color - Roger's being yellow and Jessica's is pink. Both also have the red movie logo printed on the sharpener, of course in Japanese. 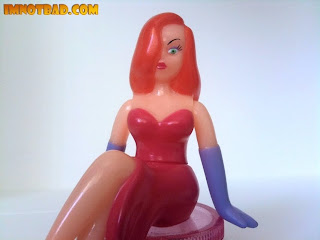 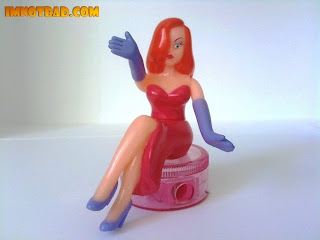 The figures are made of a hollow, softer plastic secured on top of the sharpener, and both feature articulation. Jessica is sitting on top of the sharpener and features movable arms. It appears her waist might move also, but I have not been able to and don't want to force it. Her colors are vibrant and match fairly well to the movie. Her eye is a bit strange though. It is open really wide and might look a little weird. Roger stands on his sharpener and is articulated at one arm and neck. Again the paint is well done and not sloppy at all. Even his white fur seems to have held up all these years and not turned yellow as some older plastic toys often do. I have tried to screw the top lid off but they are on there pretty tight. 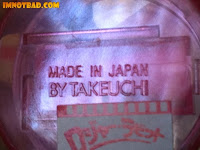 The Roger and Jessica Rabbit pencil sharpeners are marked on the bottom as Made In Japan By Takeuchi. I tried to look the name up but I could not get any results. There were some Sailor Moon keychains that came up but that was about it. 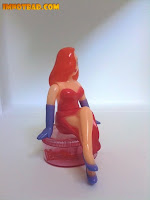 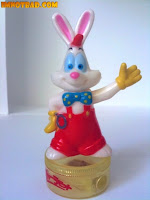 I really enjoy these pencil sharpeners. They are now top on my list. That's mainly because it's so rare to find Roger AND Jessica Rabbit merchandise that is not a high priced statue, snowglobe, or pin. It's items like these that I wish we saw more of. 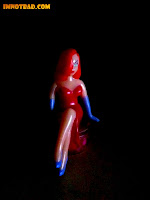 Roger Rabbit definitely dominated that area when the movie was released, with all sorts of plastic figures, toys, plush dolls, pencil toppers - the list goes on. Jessica, however, didn't get that much merchandise attention. Disney probably felt she was both difficult to create dimensionally, and a harder sell. I think since a target audience of Collectors had not been realized at the time, their main focus was kids toys. By the time the Jessica's store came around - with it's very short time frame being open, the full potential for the character had come to a stop. This was also still a time before female collectibles were a bigger hit. It's very different today. 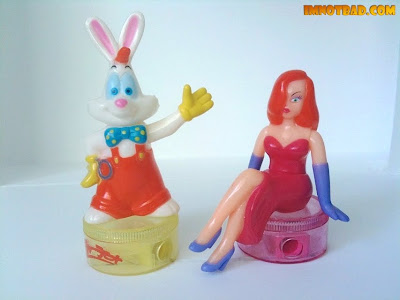 The Roger and Jessica Rabbit Pencil Sharpeners get a 4½. While Jessica's eye could have been better, these two little things have stood up to the test of time. They look great to this day, the paint is good, the colors all vibrant, and the plastic is all in one piece. It's time for more merchandise like this.
Video Review