The Jessica Rabbit Premium Format just made its official debut on the Sideshow Collectibles website just mere minutes ago and there is already a swarm of backlash over the Exclusive version being offered. People were hoping for some sort of additional piece to be added on or to go alongside with the Jessica Rabbit Premium Format figure, however the Exclusive piece has been revealed to be an art print of the statue itself, with Jessica's autograph and kiss.

There is further disappointment that the exclusive print does not have the same face as the statue. I believe that the statue face looks much more accurate than the print. Both are good facial representations of Jessica - but one would assume that the print and statue should at least match, though it states it is still "pending license approval." The print is definitely a stunning piece, however, people are not satisfied with the $325 price tag if the print is the only Exclusive being offered. I should note that normally, the Exclusive version is more expensive than the regular version - but in the case of Jessica, both the normal version and exclusive version will be the same price.

Everything from, "I'll pass on this statue," to "All those options and we get a print," is being said on various statue message boards. People have even voiced their strong opinions on Sideshow's Facebook page. Aside from the Exclusive and price-point issues, there is annoyance with some people at the bunching of Jessica's dress at the hip and waist area in the photo. There are others who are saying they will definitely buy this and are impressed by Sideshow's brilliant work. 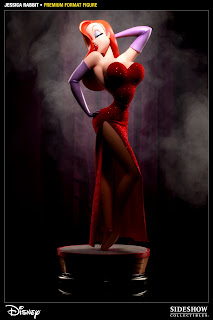 Take one look at this statue. Tell me it isn't one of THE best Jessica Rabbit collectibles you have ever seen. This is as "screen accurate" as any Jessica collectible has gotten. I will agree the print is a bit of a let down - but mainly because the face does not match the actual statue. The Penguin is a nice touch, but if you recall, Jessica and the Penguin, although both working at the Ink and Paint Club, do not share any screen time together.

The price is a bit high. In this economy, any break will help, but then again if you are spending money on collectibles in this economy, you really shouldn't be complaining about much. There will be a Flex Pay option available that will allow you to break up the payment on a schedule, rather than paying all at once. From what I understand, only the Exclusive version requires a NRD (non-refundable deposit) of 10% the final price - which would be $32.50. Alhough it's hard to overlook that this statue is twice the price of the Jessica Big Figure, you cannot deny the work is far superior. I think it is worth getting. It supports Sideshow and their fantastic artists, keeping them in business and allowing them to bring us such art that we might not get to see otherwise. They have a long track record of beautiful work - with characters spanning various movies and genres. It's hard to nail every detail correctly, especially with two-dimensional animated characters, but I think the Jessica Rabbit Premium Format will not disappoint when we see it in person.