The Jessica's Choppers t-shirt combined a lot of elements that fans had not seen before with the character. The shirt itself may have been popular, but is certainly one of the more rare ones now. Is it worth getting? Let's find out. 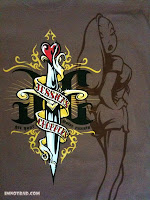 There have been many shirts released of Jessica over the years. The Jessica's Choppers thought was much different and shows Jessica like we had not before. Jessica had mainly been on her shirts in Hawaiian outfits. This shirt however, she's a biker chick - in a short top and Daisy Dukes! She's definitely showing a lot of leg in this shirt, and throwing us an over the shoulder glance. It's pretty daring for Disney again, but the result is nothing less than stunning. 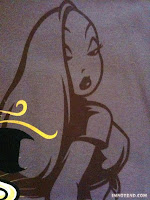 Jessica is not printed in color on the shirt, she is printed in dark brown, while the shirt itself is a lighter brown. The whole effect actually looks fairly cool. One awesome element of this shirt is the Jessica's Choppers logo, printed in color. There is a large heart-topped dagger to the side of Jessica. There are tribal elements printed in yellow around the dagger, and "Jessica's Choppers" in red, spiraling around the dagger. Not to miss out on adding in a double entendre - the shirt proudly states, "Get Your Motor Runnin'." 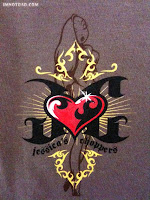 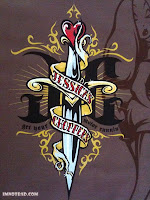 Not only that, but there is another smaller logo on the back corner of the shirt. It's the same image of Jessica outlined in dark brown but standing in front of a red heart. There is the yellow tribal elements around it with a "JC" and "Jessica's Choppers" below. The shirt was only available in Disney Parks around 2004, for a mere $19. It's rare to see it now and getting harder to come by. 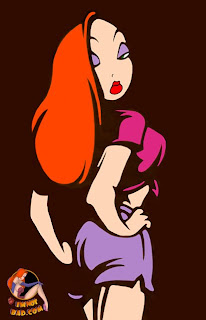 The dark outline of Jessica is cool, but it might have been nice to see it in full color on this shirt - so here is a color version I created of Biker Jessica Rabbit! 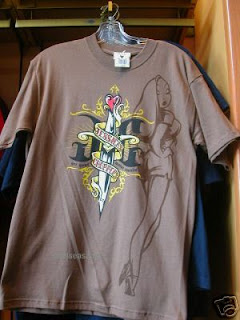 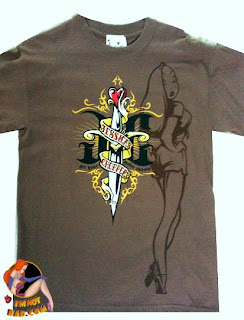 The Jessica's Choppers T-shirt gets a 4½. It's an awesome shirt that anyone can wear, and will likely be one on the hard-to-find list in the near future.