In 2002, Jessica Rabbit pin collecting had not even started, but there were some Jessica items released now and then. One of them was the Jessica Rabbit Armani statue released at the 2002 Disneyana Event. 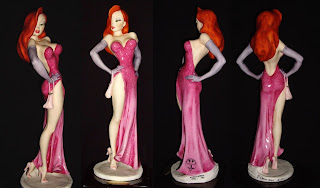 From what I understand about the artist, Giuseppe Armani, he was born in Italy in 1935 and from a very young age he loved to draw. He gained much recognition when he created his first statue and was offered a job with an art gallery in Pisa, across from the famous Leaning Tower of Pisa. Giuseppe began to draw and sculpt in a 16th Century Florentine Renaissance style, but loved sculpting as it allowed him to create something with dimension. In 1975, the Florence Sculture d'Arte offered him the opportunity to work exclusively for them using any style he wanted. Armani accepted. I have not read anything on how he came to do work with Disney, but they undoubtedly recognized him for his astounding talent.

Sadly Armani died in 2006, but he lives on through his fantastic works that speak for themselves. 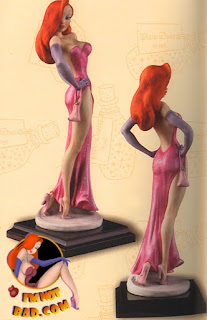 The Jessica Rabbit Armani statue was previewed in a Disney catalog for the event, and some statue shops and dealers who were attending the event took pre-orders. I did pre-order one from a site that I can't even remember, but at the time the price of over $700 was pushing it. After much deliberation, I cancelled it. Most places did not charge you anything until they actually got the statue. In such circumstances, you never really know if an item is going to sell out, so any reputable company should not charge you until they have the item in-hand.

Armani created many different Disney characters over the years, such as Cinderella and Snow White, so it was quite a surprise to see that Jessica was going to join that collection. The Armani statues were very high-end, and you no doubt saw one of his statues if you went into any specialty store that sold art and statues. The Jessica Rabbit statue was only going to be offered at the 2002 Disneyana event and the going price was around $700+. It was a limited edition of 750 and is a truly stunning piece in person. It's around 17" high and comes on a special wood base with her name on it. This might not be exactly character accurate to the move version of Jessica, but it's created in Giuseppe Armani's signature style. 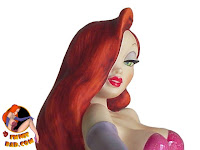 I'm not sure what happened, but a lot of these statues ended up on eBay after the event for around $250 or so. That's a big difference from $800 (or the price it's going to now which can reach the $1500 range). I was lucky enough to get one and like I said, in person it's just so much more pleasing to look at. For any Jessica collector, this is something very different. It has a softer look and is very classy and so very well made. It's not a small statue either. Jessica's face looks very nice and holds Armani's classic style perfectly. It does not take away too much from her look being in this style and sort of goes along with a 1940's actress look that Jessica has anyway. 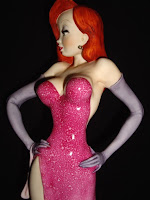 The dress was smartly done with a speckled effect to mimic the sparkles. Her dress is also a very correct color to that of the movie. Her dress and hells also have a shine to it, unlike the rest of the statue. With Armani's statues, the paint is never bold, but instead has a sort of wash-out to it or a much more subdued tone. Such is the case here with the Jessica statue. The darkest color being her hair, the lightest is her skin. There is a gold-tone earring and clasp on her purse. I'm not sure if they are real metal elements or just paint, but they look very convincing.

Jessica is showing a whole lot of leg here and they did not do anything to change her design. She's in her familiar look-over-the-shoulder pose, the paint, texture and look creates such an amazing look. Jessica is actually held up a little by by her dress when you see it from the back, but it isn't anything that takes away from the overall finished product. Jessica always presents a challenge since her feet and heels are so small. Even though it's fudged a little bit here as you can see at her feet, I think she is held up very well and was the only logical way to have her sculpted standing. 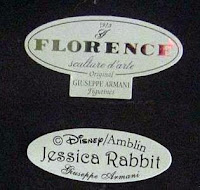 The base is a solid, heavy wood with a dark finish and there is even a small gold plaque with Jessica's name on it. The bottom has Disney/Amblin, Jessica Rabbit, Armani and Florence Sculture d'Arte logo stickers in place.

Each piece had Armani's signature sculpted into it, but some pieces from the event, if not all of them, were in fact hand signed by the master himself. I haven't seen one that is not hand signed, but this personal signature might have been only for an exclusive amount of statues. 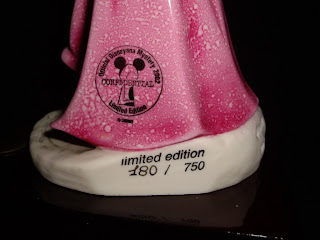 There is a rather large stamp on the back from the Disneyana Event. I don't think this needed to be so big, even being on the back of the sculpture. There is also an LE stamp and handwritten number on every piece. 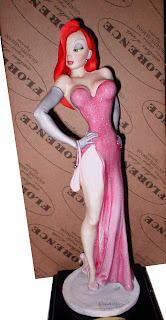 The Jessica Rabbit Armani Statue gets a 4½. It's one of the best pieces you will ever see for Jessica Rabbit. The style might not be for everyone - and the availibility was limited to the 2002 Disneyana Event only, but I assume this will only keep increasing in value.