Some time around the summer of 2003, Disney released a collection of Jessica Rabbit Christmas ornaments. We were treated to not one, not two - but THREE different ornaments available in Disney parks, mainly Disney's Days of Christmas store. Take a look at how these three ornaments hold up so many years later. 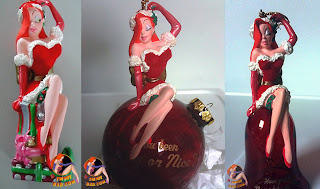 Jessica Rabbit with Christmas Presents was the most inexpensive at $9 each, as it was one piece cast in resin. The sculpt is great and these were easily available in the Disney parks many months before holiday season. The ornament had a gold rope to hang from and was definitely a fantastic look for Jessica, sitting playfully in a Christmas outfit on top of gifts. When a Toon Diva needs to sit down, you let her sit wherever she wants! She is holding some mistletoe near her head and waiting for that holiday kiss.

There were also a lot of extras this time around to the ornaments, one being that all the dresses and hats had red flocking. Flocking is a bit more fuzzy than just regular material, but it gives the ornaments a dimensional look. 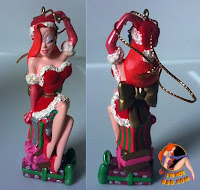 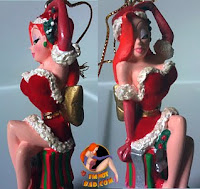 There is glitter added to the white trim of the hat, dress and gloves, and also some to her purple eyelid. Again, like the 2000 Jinglin' Jessica ornament, the gloves are a pearlescent dark pink and her bow is painted in a gold-tone paint. Even her lips and shoes were painted with a shiny color to make them stand out more from her hair and skin tones. The Christmas gifts she sits on are also in shiny and pearlescent paints. 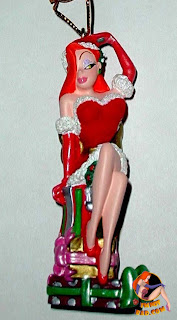 The whole thing comes together really nice, and if you are a Jessica Rabbit fan, you can find this on eBay sometimes (especially around the holidays.) It's easier to come by than the Jinglin' Jessica ornament but certainly seems to be inspired by it, using the same costume, even down to the holly garter on her leg that's just barely seen. I'm not sure who designed this as it was not part of any Artist collection, but she certainly seems to have a more ample figure this time around. 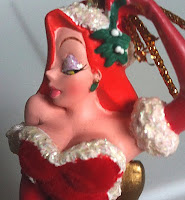 The Jessica Rabbit Have You Been Naughty or Nice Christmas Ball Ornament sold for $14 each, since this had a bit more to it. The pose is a bit similar to the previous ornament, but this is definitely a totally different sculpt, not just the previous ornament thrown on top of a glass ball. To me, I think this is very close to how Jessica Rabbit really looks. The face is a bit rounder, the body has all the right curves and the paint colors are all vibrant and correct. There are some uneven paint lines around the hair and face though, which you can see in close-up photos, but they don't stand out too much. Her look is a bit more sly this time, and they did a much better job with her earring. 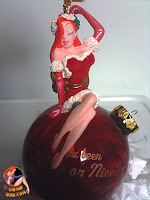 There were two different versions of this ornament released. The first is the one I bought when it was initially released. This version had a clear red glass ball Jessica was sitting on. Across it in gold reads "Have you been Naughty or Nice?" What a great line for Jessica Rabbit, and it made this ornament perfect for her. The glass ball was fitted with the usual gold topper and loop, but this is not where you hang it from. There is a gold rope from the resin Jessica figure to hang the ornament, so it looks like shes just sitting right atop the glass. The other version of this released is an opaque red ball, rather than clear. It might have been changed so that you could better see the writing on it, or so that you couldn't see the figure glued to it through the bottom, or perhaps because the resin Jessica Rabbit figure was not staying glued to the glass - which I will get into in a moment. 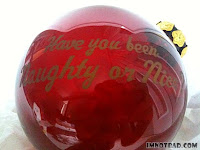 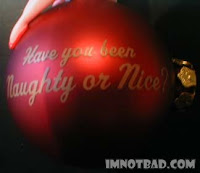 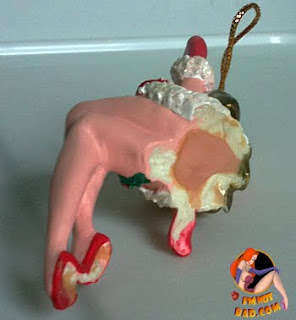 After a few years and only a few displays at Christmas (on an ornament stand, not on a tree) I noticed the glass ball was becoming loose from the Jessica figure. I didn't want to chance breaking it so I would display it not hanging up high in case the ball fell off. About a year ago I unpacked it and the Jessica figure had come completely off the glass ball - but at least in good condition. I'm not sure if this was a common problem for these ornaments - since I did see another one or two of these on eBay that were also off the glass ball. This may have brought about the change in the glass ball from the clear to opaque in a possible second run to remedy the problem. 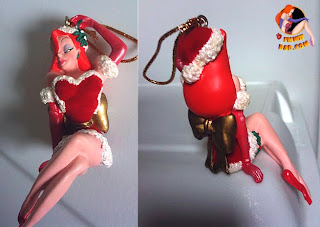 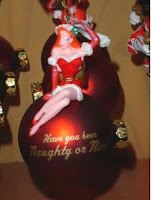 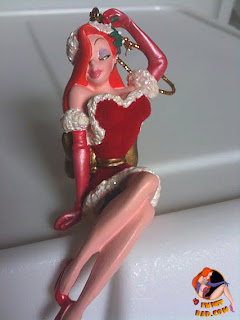 It's a shame this ornament came apart. The sculpting was much more accurate than the other two - and who does not love having a classic Christmas ball ornament on their tree. If you do have this ornament and use it, you might want to be careful and check that it is secure on the glass ball to avoid and accidents.

The Jessica Rabbit Have You Been Naughty Or Nice Christmas Bell was around the same price as the Ball Ornament. With two great ornaments already, we got very spoiled with a third, but this one falls a little under the mark with its sculpt. There is something about the face that is a bit off here. It's nice, but I've never been able to put my finger on it. The face, and whole figure, is a bit thinner than the others. This might be on purpose because she is sitting on top of the bell, but being a new sculpt, I doubt they would change the look of her face for that reason. Again you can see that it is in fact a totally new sculpt, it isn't the resin figure from the ball ornament simply put on a bell now. 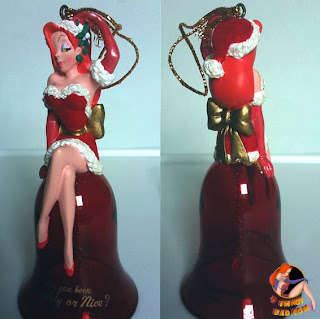 Even though the face is a little off, this is a great ornament. Jessica is sitting in that familiar pose, holding mistletoe and giving you the eye! This time she is on a clear red glass bell - which also reads "Have you been Naughty or Nice?" Disney was brave with these ornaments and you have to respect that. Cleavage, legs, mini-dress, garter - they outdid themselves after years of being too afraid of this great character. 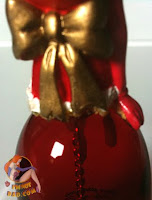 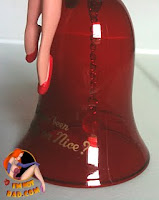 I have not seen any of these with an opaque glass bell, so I assume there was only the clear. This was stamped Disney/Amblin at the bottom of the glass bell, which is not very distracting. The glue where the figure meets the bell looks a bit sloppy and yellowed, so I'm not sure if this ornament will have the same problem as the glass ball. It chimes nicely, with a small plastic ball inside attached to a chain - and it was great to see Jessica Rabbit get this treatment since there are SO many Princess Christmas Bell Ornaments. 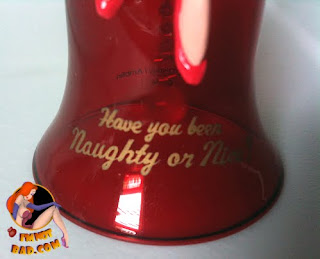 Jessica Rabbit asks "Have you been Naughty or Nice?" 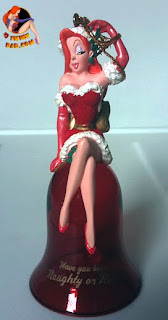 The Jessica Christmas Presents Ornament gets a 5! This is a perfect Jessica ornament. The pose is great, the colors are vibrant. There's nothing not to like.

The Jessica Christmas Ball Ornament gets a 3. I'm not sure how to rate mine since it came apart, and not by my doing. It would pain me to rate it a lower based on that, but without the glass ball attached, the ornament loses its purpose - especially if this is a common problem for these ornaments.

The Jessica Rabbit Christmas Bell gets a 3½ because the look is a bit off, and I'm skeptical of the glue holding the figure to the bell.