For many years, there was a dry spell for Jessica Rabbit, Roger and company. During the release of Who Framed Roger Rabbit, tons of merchandise was released - although the main focus seemed to be on Roger, and Baby Herman & Benny the Cab to a lesser extent. Very sporadic merchandise was released during the time of the release of the short films; Tummy Trouble, Rollercoaster Rabbit and Trail Mix-Up. The three shorts didn't even have separate "specialized" merchandise dedicated to them. The rumors have always theorized on why this happened, but it all seems to come down to Disney's Michael Eisner and Amblin's Steven Spielberg did not get along - so in essence it was easier for both companies to just let it go rather than try to get them to agree on anything together (which included more short films, the sequel, and merchandise.) 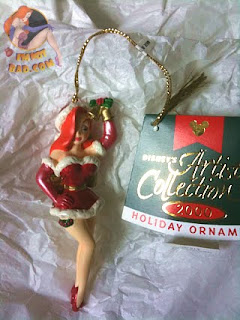 Between 1989 and 2000, an approximate list of Jessica Rabbit merchandise released is - a Roger Rabbit and Jessica Classics Collection Statue, an embroidered baseball jersey shirt, the Jessica Rabbit doll by Mattel, Jessica Rabbit Mini Bean Bag Doll, a 10th Anniversary Coin, a Toontown Snowglobe, A Benny the Cab Snowglobe, a 10th Anniversary Framed Pin set, The Brenda White Pin Collection, a Countdown to the Millennium Pin, and a few other pins as well. So over 10 years, the list of merchandise was pretty thin - however that was all about to change 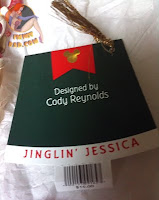 In the summer of 2000 the Disney's Days of Christmas store very surprisingly released a Jessica Rabbit Christmas ornament - entitled Jinglin' Jessica. This was part of a new Disney's Artist Collection Holiday Ornament series and at the time it was only the third Jessica Rabbit Christmas ornament ever made (the first was a part of a mail-away series by Grolier in the 1990's and the second was a glass ornament by Radko in 1999.) I only found out by way of eBay that this had been released, and that there was also a Roger Rabbit ornament as well. Not that they were not worth every penny, but these were pretty high end ornaments - selling for $15 each! 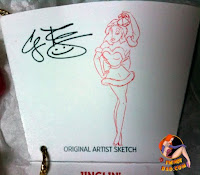 Each ornament came with a special card attached to the ornament string, with a gold foil stamped logo on the front, and the artist name and ornament title on the back. Inside on the top there is an original artist sketch for the ornament in red. I thought including the artist's concept art was a great idea, and it fit the theme of the purpose of the ornament collection. There is a stamped signature of the artist, Cody Reynolds, next to the drawing of Jessica. This is one of the fewer collections available at the time that really celebrated the Disney artist. It also finally let us know just who was one of the artists behind Jessica Rabbit merchandise. Although this was designed by Cody Reynolds, I do not know if he actually sculpted the piece. Cody Reynolds is also the designer of the first Jessica Rabbit Big Figure. 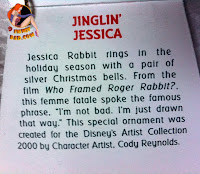 The inside also has a little story about the character. This one reads: "Jessica Rabbit rings in the holiday season with a pair of silver Christmas bells. From the film Who Framed Roger Rabbit?, this femme fatale spoke the famous phrase, "I'm not bad, I'm just drawn that way." This special ornament was created for the Disney's Artist Collection 2000 by Character Artist, Cody Reynolds." Worth mentioning first is that Who Framed Roger Rabbit never had a "?" in the title, as putting a quotation at the end of a movie title was considered bad luck, so the director never included it. Also, for this ornament, the silver bells mentioned are actually gold.

The Jinglin' Jessica Christmas Ornament is spectacular. There is a lot of "plussing" included. The bells, bow and earring are pained in a gold-tone. It isn't as if you would think there was real gold on there, but it actually shines enough for the look to be very convincing. The white trim of her dress, gloves and hat have some white glitter. The gloves are a dark pearlescent pink and to top it all off, her dress and shoes have red glitter (and unlike so many of her statues, the glitter here is pretty secure.) And let's not forget the holly garter Jessica is wearing to make the eyes wander elsewhere!

The back of the ornament is stamped Disney - although Amblin does not appear at it usually does for any Who Framed Roger Rabbit merchandise. 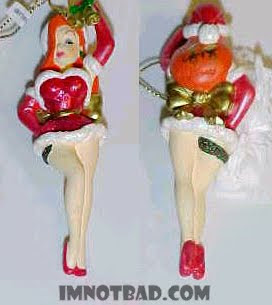 A Jinglin' Jessica Ornament signed by Cody Reynolds in gold on Jessica's hair.

Even though this is a Jessica Rabbit website, we couldn't leave out the main man, Roger Rabbit, now could we? Just as with Jessica, the Roger Rabbit Merry Melodies Christmas Ornament is impressively well crafted. It also comes with a special card, which reads: "Holidays in Toontown will never sound the same again! Silly as ever, Roger Rabbit straps on several musical instruments in his attempt to share his holiday spirit. This ornament was designed for the Disney's Artist Collection 2000 by Senior Character Artist, Costa Alavezos." Gold tone paint, glitter and lots of detail make these two ornaments a must have on your Christmas tree - if you can still find these rare ornaments that is. 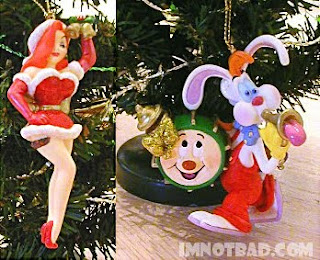 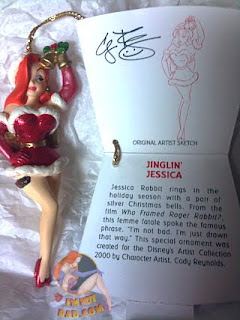 It's hard to believe I bought this beauty way back in 2000. To date, including this ornament, there have only been six Jessica Rabbit Christmas Ornaments ever made. This is definitely an item we need to see much more of. We get all sorts of characters, but Jessica is on the short list in this area and I think it's about time we see some more. 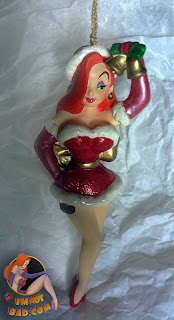 The Jinglin' Jessica Christmas Ornament gets a 5! This is such a great Jessica Rabbit ornament. If you do ever see it on eBay, be sure to place that bid, it has become hard to find.