After a long hiatus, Jessica Rabbit was making a comeback, at least in pin-form anyway. Month after month a few Jessica pins were released - however, it was about to get a lot more exciting (and expensive!)

There was a period in 2004, between May and October, where no Jessica pins were released. Epcot held a Family Pin Gathering Event in September which did offer one Jessica and Roger pin, yet that pin had been previewed months before. So, it almost looked as if the attraction to Jessica pins was a very momentary thing - until - a new series of Jessica Rabbit pins were spotted on display at the event.

Four of The Jessica Rabbit Disney Auctions 6 Pin Set displayed for the first time ever at the Family Pin Gathering Event.

These were no ordinary Jessica pins. They were to be part of the most sought after Jessica Rabbit pin set ever. Disney Auctions (run in part by eBay) had opened online, and the first Jessica and Roger Rabbit Valentine pin they offered earlier in that year was less than flattering. Since then, the only Jessica pins available were from the parks. This new Jessica set was about to change everything. 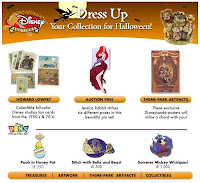 Disney put forth a lot of advertising for the Jessica Rabbit set through emails and advertisements on their front page. 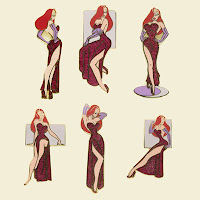 This is an astounding pin set, and the reason it is so popular is because the work on them is fantastic. Each one featured a full glitter dress and they were all almost more than double the size of the previous pins. This was the first ever Jessica Rabbit Limited Edition 100 pin set / series released. This was listed as a pin set of 6, but 75 out of 100 were up for bid together. The remaining 25 of each pin were up for bid separately. The bid started at $108 for the set of six, and $18 each for the remaining separate pins ($18 x 6 = $108 so that was fair). 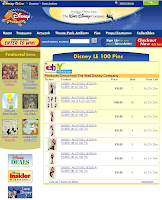 Bidding started the beginning of October 2004 and it got a little heated. Oddly, if you bought all of the pins separately, it would have worked out to almost the same price anyway. The full set sold for $165.10 (which is around $180 with the tax and shipping) so this was not a cheap set at the time, but it was well worth every dollar. It's also one of the rare times a pin set was broken up so that you didn't have to buy all of them. The way the auction worked (on the set which was sold in the group of 75 for example) was until there were 75 bids for $108, it stayed at that price. When all 75 were spoken for people could then start to be outbid by a higher price, if someone placed it. I think?! I can't really remember. All I did was check every single day to make sure I was not outbid.

Jessica Rabbit #1 was interesting because even though she is in her usual dress, she does not have her gloves on. These pins seemed to be pretty daring for Disney because Jessica is certainly showing a lot of leg as well in some of them. As I mentioned the pins are very well made, I don't recall hearing of any complaints or issues with these pins. All of them feature that deep maroon colored glitter and four of the six poses are completely new. 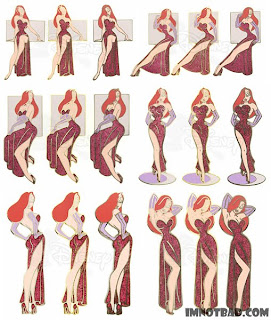 Even more rare are the one-of-a-kind Artist Proofs that Disney put up for auction at a later time. These were in sets of three, each offering a pin in gold, silver and black metal.

The pins were designed by experienced Disney artist, Jennifer Oliver. Some of her pin art also ended up on auction at a later time and I must say she is one of the best Jessica Rabbit artists I have seen. Over the years, this pin set has been harder and harder to find, especially sold all together. In 2010, a full six pin set of these was auctioned on eBay and bidding reached over $1,000. 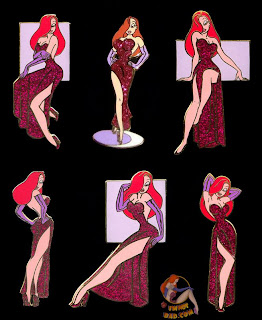 The Jessica Rabbit Disney Auction 6 Pin Set gets a 5! These are some of the best Jessica pins you will find. From the fantastic artwork, to the full glitter and playful poses - there has not been another set released to match this one yet.