It's being reported by various blogs and news outlets that the Roger Rabbit's Car Toon Spin ride in Disneyland, California will be receiving a revamp by removing offensive imagery and shift focus to the central character of Jessica Rabbit - Private Eye.

Roger Rabbit's Car Toon Spin opened in 1994, a year after Disneyland's Toontown expansion. The ride has long been a staple to the area, being a newer "dark ride" that could be enjoyed by both children and adults. Over the years it has seen only small modifications, none of which changed the story. People often forget the ride has a story of its own and is not a copy of the movie. Jessica Rabbit has been kidnapped by The Weasels. You board the ride vehicle, Lenny the Cab (Benny's cousin), and join Roger and Benny in a chase through Toontown to rescue her.

Even several years back I noted that there might eventually be some issue with Jessica being tied up for her scenes in the ride. In 2012 I conducted an interview with Roger Rabbit's Car Toon Spin ride designer Marcelo Vignali and happened to ask this very question:

Was there any concern about having Jessica appear in Car-Toon Spin, and actually having her "tied up" in the beginning of the ride?

Hah! Well, it seemed like a good idea at the time! But, I realize that image taken out of context can appear very inappropriate. When the studio wanted to make prints of my designs for the ride, they printed THAT exact image. When I saw it, I was horrified! I never intended this to be a stand alone image. I asked them to pull the image from the public, and thankfully they did - but they did sell these prints to Disney employees (cast) only. So, they're out there if you can find them! As it turns out, that's the collectible everyone wants.

As of today, the animatronic of Jessica in the trunk is definitely removed, as seen in videos by Fresh Baked. The information that follows however, is something that I think will take a lot of Jessica fans by surprise. 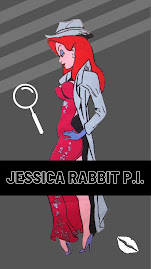 Several social media pages, blogs and websites like Disneyland News Today, Inside the Magic, Blog Mickey and All Ears are reporting on comments by The Orange County Register which outline a plan by Disneyland to make the ride "more relevant" by removing the culturally outdated damsel in distress archetype  - and giving Jessica Rabbit a new role as a private detective fighting crime in Toontown.

“Jessica Rabbit has determined it is past time for her to throw her fedora in the ring by starting her own private investigation service,”

The article does not state any official Disney sources, other than it is the new ride backstory. This comes on the heels of many changes to classic Disney rides with scenes or imagery the company feels are outdated or culturally insensitive - Pirates of the Caribbean, Jungle Cruise and Splash Mountain being the most notable.

With Mickey and Minnie's Runaway Railway attraction opening next door in 2023, changes of some kind appear to be imminent. Jessica is still present at the end of the ride for now but it's been suggested that animatronic will also be changed or removed at some point. It's worth noting this new ride backstory has not been formally announced by Disney. 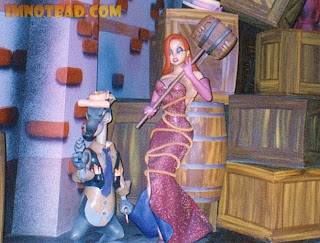