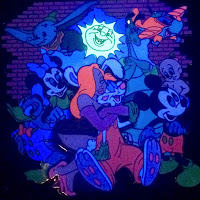 The Who Framed Roger Rabbit 30th Anniversary pins were released today, August 30th, in Disneyland and Walt Disney World locations. Three pins are dedicated to the 30th Anniversary. Lets take a closer look at the pins, and see who's behind that Ink and Paint Club door...

The first pin is Roger Rabbit after breaking through a wall with clouds of smoke and holding out his hands as he did during his "two bits" scene. The clouds have a pearlized fill and the logo is printed on. This pin is a Limited Edition of 2,500. This pin come on a special 30th Anniversary backer card and sells for around $14. 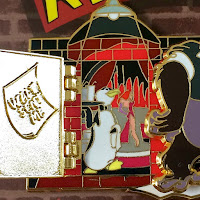 The second pin is called Walt Sent Me! and shows Bongo the gorilla bouncer standing in front of the door to the Ink and Paint Club. The door is hinged and when opened shows the stage inside with Jessica Rabbit and a penguin waiter. This pin is also a Limited Edition of 2,500. This pin come on a special 30th Anniversary backer card and sells for around $14.


The last pin is a jumbo and is in a window box. It shows Jessica Rabbit holding Roger and they are surrounded by Donald Duck, Minnie Mouse, Dumbo, the Toontown sun, Pedro the airplane, The Reluctant Dragon, Baby Herman and Mickey Mouse while in Acme Warehouse in front of Toontown. Jessica's dress is glitter filled, and the sun is glow-in-the-dark and blacklight reactive. Roger and Jessica are a second layer on the pin. This pin will be a Limited Edition of 1,500 and sells for $54.99.