Two framed Jessica Rabbit pins sets were released practically on top of each other. The second set was far more favorable that the first - however, both sets were a Limited Edition of 1000 and stayed around so long they ended up at 75% off. This review is for the second set released called Scenes of Jessica. Was it worth even that deeply discounted price - Find Out! 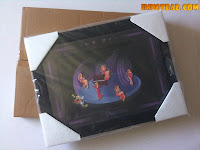 There have been a few Roger-themed sets which were framed. The first was the 10th Anniversary set from 1988, featuring the cartoon cast against a Toontown backdrop. There was a small set by artist Brenda White - yet those pins were removable from the frame. The other two sets were from the Disney Shopping website back in 2007. One set was five pins of Jessica surrounding her name. It wasn't so bad being the first framed set solely of Jessica - but two months later, another framed set was released that looked like a bit more work had been put into it. Unfortunately, some of the pin designs looked similar to the previous set, and the pin artwork was not as good as it could have been. 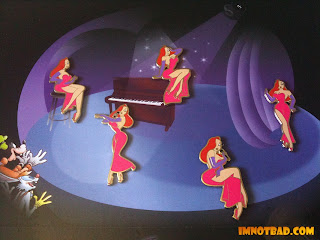 Overall, the Scenes of Jessica framed set is visually appealing. While the other set released was only Jessica's name in red against a black background with some kisses, this set put a little more effort in the background and border designs. The placement of Jessica was more thought out for this set - rather than having her stand around her own name, she's actually on stage doing what she does best - singing! For a time when a pin or other merchandise was released, it was rare to see Jessica singing. This set has that as it's purpose, with five different pins of Jessica Rabbit on stage at the Ink and Paint Club. The background is mainly black, with the stage being purple and light blue. 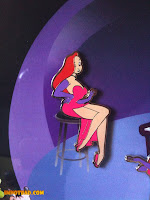 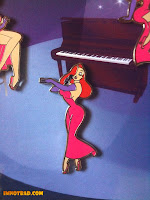 Starting from the left, the first pin is of Jessica sitting cross-legged on a bar stool (the stool is actually the background and not part of the pin). Jessica's right hand is a little weird, and the whole design of the pin, as with the other, seems to be rushed or simplified. It's also worth mention that all these pins seems to have a slightly thicker metal border going around them. The second pin is nicer, and it's Jessica Rabbit singing! Jessica is standing, holding a back microphone, and reaching out to her audience - dress flowing behind her. From the design, it looks like the right leg was made to have a slit in the dress, but was instead colored pink. Many people like to incorporate a mic into fan art or costumed photos of Jessica, but in the movie she doesn't ever use one. Still, it gets the point more across that she is singing, however they have used a more modern day microphone here. 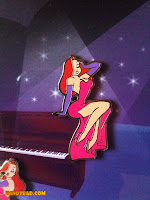 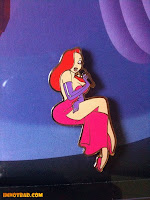 The third pin is a more familiar pose - Jessica is sitting on top of a piano (which is the background) with one hand behind her head, very similar to her neon sign pose. The back print has the spotlight on her and twinkling lights. Again the artwork seems rushed and not as clean. This pin was also similar to one released in the previous Jessica framed set. The fourth pin is the best of all. Jessica is sitting on the end of the stage, showing some leg, and singing into a mic. The art is much nicer, you can clearly see her eye, lips, and the white reflection of her glove. This pin is the best executed. 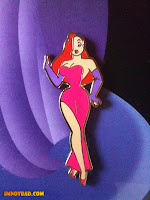 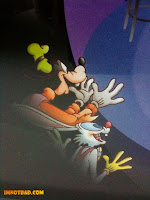 The last pin is a post we have seen often, Jessica is strutting out from behind the curtains. The curtains are part of the background print, and even though they are just placed right there for the sake of the pin - it follows the more art deco style of the background. A nicely added touch is that of Roger Rabbit, and Goofy, sitting in the audience watching Jessica perform. They are also part of the print, and while Goofy is drawn well, Roger seems a little off. It's still a rather nice addition to the overall look of the set having both characters here. 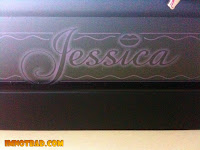 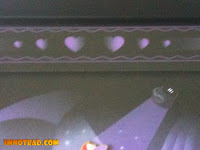 The pins are in a shadowbox frame, so there is a raised border around it. Jessica's name is in purple, with a kiss dotting the "i." This is also the same exact design of her name used in the previous set. At the very top are a few hearts fading in purple. Each corner also has a heart and circle design, and the whole thing is surrounded by purple artsy design work. It shows much more effort put into it than the previous set in terms of art details. The frame is all black and very sturdy, with a wire on the back making it suitable for hanging. 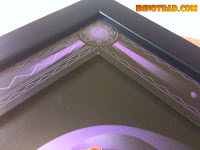 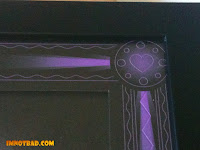 The set was originally released at a price of $99.95, at a Limited Edition of 1000. Since the first Jessica set was released at the same price and edition size, both sets flooded the site for a long time and eventually got way down to about 75% off. I don't know why they would have released the two sets, but I think there had to be a mistake made somewhere and one set was released way too soon. At least it gave people the option to chose which set they liked, and allowed anyone who had not been able to buy any Jessica pins during the pins-selling-out-early period a better opportunity.

While the presentation was clearly better, the pin designs suffered this time around. The pin on the left is from the earlier Jessica Rabbit Signature framed Set. The line are clean, her face has details, and its an overall better look. The pin on the right is from the Scenes of Jessica set. You can see that the fingers are weird, her eye is missing giving her a zombie look, and the lines seem sloppier. All but one pin in the Scenes of Jessica set could have been improved upon. While the looks of the pins doesn't dramatically take away from the whole appeal of the set, the point of the framed pin set - is the PINS! So, the pins should be the center of attention and the work on them should be fantastic. 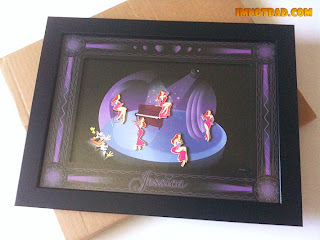 The Scenes of Jessica Framed Pin set gets a 3. There was a huge mistake in releasing two LE 1000 framed sets months apart. Both went on mega sale (something unheard of for Jessica pins at the time) and even though the presentation of the framing was much nicer, the pins themselves were sloppier and not as well done as the first set.