One of the first Jessica Rabbit shirts to come out during the new resurgence in her popularity was the Patty Cake Lounge Embroidered Button-Down Shirt. Years after this release, there was another similar shirt released - however this shirt has a lot more detail and work put into it. Even though it was something new for Jessica fans, this great shirt eventually found its way to the sale rack. 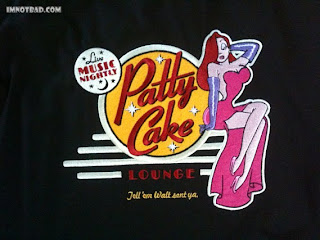 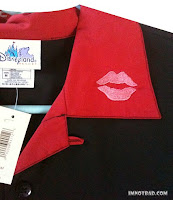 The Jessica Rabbit Patty Cake Lounge shirt started off as a Disney Park exclusive, yet with all the details for a great new Jessica shirt, it went on to the Disney Deals website and various Disney Outlet mall stores. I'm not sure why because it is one terrific shirt. This looks like a bowling shirt style that matched shirts with other characters that were released at the same time. It's black with maroon trim and is dressy enough to wear to a nice place, but still can be worn casually. The left collar has an embroidered lipstick mark, which is a pretty unique and very fitting for a Jessica Rabbit shirt. 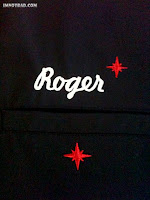 Adding to the list of features on this shirt is the "Roger" name embroidered above the left pocket of the shirt. There are also some red star bursts around it. It's nice to see some work and details put onto a shirt, but I wonder if anyone who did ever wear this was called Roger by people thinking that was the wearers name. It would only really make sense to a Who Framed Roger Rabbit or Disney fan, so even though it really does not take anything away from this shirt, they could have probably left the name off of it. 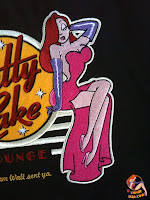 The back of the shirt is were it all comes together though. There is a large embroidered Jessica Rabbit across the back, in her iconic Jessica's store pose. The back is mostly embroidered, but not fully. Jessica's skin, hair, gloves and shoes are - but the dress is material. The work here is fantastic. It looks just like she's supposed to. The Patty Cake Lounge logo is all embroidered also, except for the orange circle in the back. Aside from adding "Live Music Nightly" it also smartly says "Tell 'em Walt Sent Ya" below.

There were also embroidered elements on each sleeve. The left had an image of the penguin waiter which said Catering to an animated clientele. The right said, Hot Sounds, Cool Toons,with either Disneyland or Walt Disney World below. With all the work on this shirt, a price tag of $55 each might not be so hard to believe, but it seems this shirt did not prove to be a huge hit when it went to Disney discount stores on line and outside the parks for half the price. 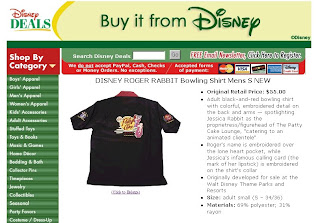 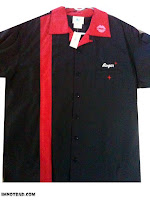 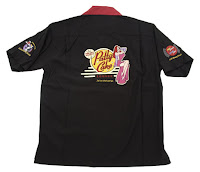 The Jessica Rabbit Patty Cake Lounge Embroidered Shirt gets a 4½. I don't know why it didn't sell out, with its great image of Jessica - but perhaps it should have been available at a cheaper price to begin with.