Some merchandise reviews come pretty easily to me. Others I put off doing for way too long. I don't know why I have held off reviewing the Roger and Jessica Rabbit 15th Anniversary watch/statue - it's a really nice item all around. After putting it off for months it's about time I take a look at one of the few Roger Rabbit 15th Anniversary items to be released. 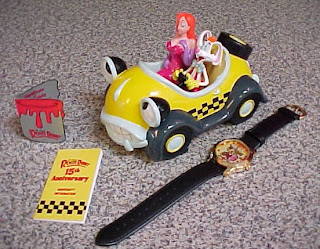 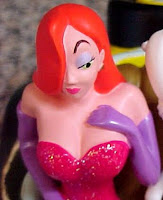 The whole statue was a painted resin. The only extras added is the shiny paint on Jessica's purple gloves and the glitter her dress, which is on there fairly secure for a change. Her look is a little off. The eye and nose are not much as they should be but she still looks good. I'm not sure what exactly she is supposed to be doing with her hands, but perhaps the sculptor could have thought of better placement for them. Her colors are all correct and the paint lines stay pretty clean for the most part. 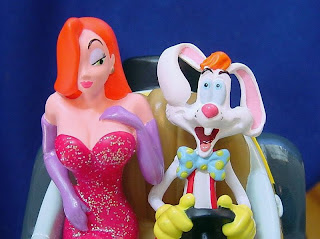 Roger also has a bit of a weird look to him although the sculpting is done very well with his ears and hands. The paint is a bit sloppy inside the mouth, but still the work on it is pretty clean. This is one area you want to be careful of though because is neck is so thin, and is not attached to the seat behind him for stability. I've seen a few of these on eBay for sale with Roger's head broken off. 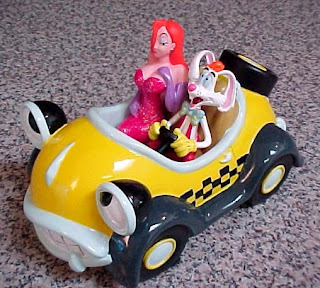 Benny the Cab serves as the base, and also as the display for the watch. His paint work is shiny and his look and size comparison are all pretty spot on. However, there are many uneven paint lines on this characters that show up against the yellow.

On it's own, this is a fairly solid piece for a statue. I imagine if it were sold just like this people would still buy it - but it comes with something extra being an official anniversary item. There are two slots above and below the spare tire on the back. This is where you can display the watch that comes with it. You put one band of the watch through and can display it a few ways. The main one is usually with the watch face propped up behind Roger and Jessica facing out. Another way would be to have it resting on top of the spare tire. 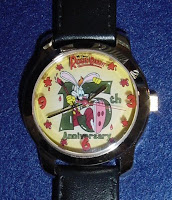 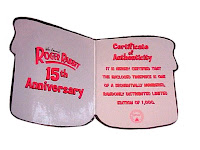 The watch is very well done. Although there is no photo of Jessica on it - Roger Rabbit gets his due here. Roger is squeezing between the number "15" while holding a paint brush. It says "Anniversary" below and the Who Framed Roger Rabbit logo is at the top. The numbers and paint blotches are dimensional on the face and really stand out, giving it a much more interesting look. It also comes with a Certificate of Authenticity in the shape of a red paint can, noting that it is a limited edition of 1000.

For an LE 1000, it still was not cheap. It originally sold for $125 but eventually went on sale through Disney's website for a short time. It's fairly easy to find still and sells around the same original price or lower. 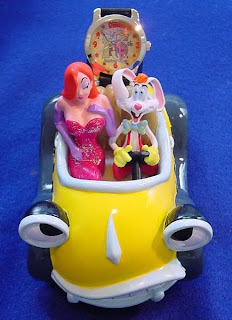 The Who Framed Roger Rabbit 15th Anniversary Watch and Statue gets a 3½. It's nice that it came with the statue, but they didn't include Jessica on the watch, there were some sloppy paint lines on Benny, and the price point was a bit high.