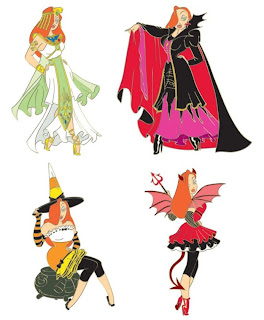 Finally, the sneak peeks for the Jessica Rabbit Halloween pin series have materialized! This year you can chose from Jessica as Cleopatra, a Vampire, a Candy Witch, and a Devil. It's not known exactly when these pins will be released but pins are released at midnight on Sunday/Monday (that's 3am Monday morning for people on the east coast).

**Update** The Jessica Rabbit 2010 Halloween Costume Pin series was released the morning of October 4th. The pins were very hard to find for most customers, not even appearing on any of DisneyStore.com's pages, yet some customers found them. The Vampire and Devil Jessica Rabbit pins sold out first, and very fast - followed by the Candy Witch and Cleopatra pins later in the morning. The Tinker Bell pins, and several other pins, also suffered the same technical glitches. These pins were mainly found only when customers who did not have a problem with the website sent out a direct link to the pin pages via chat and message boards to people who could not find them. There were also problems during check-out as well and there was no limit amount on how many pins a customer could buy at one time. This was by far the craziest and most problematic Jessica Rabbit Halloween pin release ever.

The Jessica Rabbit Halloween pin series for 2010 was very hard to find for most people. It did not come up on Disney's pages or when doing a search. Only when provided the correct link by other customers could these and several other Halloween pins be found.

Even though they were so hard to find for most people, somewhow the Jessica Halloween pins sold out the same day.

Vampire and Cleopatra Jessica Rabbit sold out in about an hour.