HalloweenCostumes.com now has a Jessica Rabbit-style costume complete with long red dress and purple gloves - a must have for your Jessica Rabbit costume. Disney only officially released one back in 2005, which was never released again. Finally, there is a Jessica Rabbit costume that compliments the movie, and can make YOU look your sultry best! It's also a perfect costume to wear if you'd like to draw some attention at the next big convention. But, even if Jessica is not your fave, HalloweenCostumes.com has the biggest character selection around with others characters like Dr. Who, Lady Gaga, Superman and Darth Vader. There is even a Roger Rabbit-style costume for anyone wanting to be that hilarious hare. 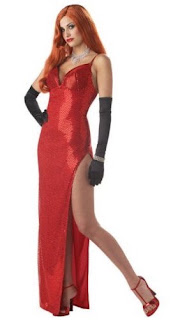 This costume has been out for a few years and it is for sale through HalloweenCostumes.com as "Sexy Movie Star". If you want a little more glam and sparkle, this IS the costume you have been looking for. It's a pretty good bet that if you wore something like this for Halloween, people would know who you were. Even though pictured with gloves and a wig, they are not included but you could get them separately right on their site.

80sTees.com has listed a great Jessica Rabbit costume - brand new for this year. It comes with a red sequin under-wire dress and purple opera-length gloves. There are also a bunch of other fun retro costumes on this site, such as: Mario, Luigi and Peach, GI Joe, Ghostbusters, Sesame Street, Fraggle Rock, Simpsons, HR Puffnstuf, Elvira, Jem and more!

**UPDATE** It appears the Jessica Rabbit costume from 80's Tees is sold out.