30 Years Of Who Framed Roger Rabbit 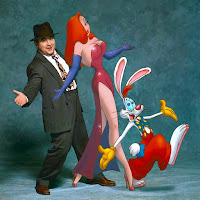 Today marks 30 long years since the debut of Who Framed Roger Rabbit, a cherished movie that successfully blends live action with animation. As the tagline states, 'It's the story of a man, a woman and a rabbit in a triangle of trouble.', and all these years later the movie is still as entertaining as it was when it debuted in 1988. The movie was originally based on the novel Who Censored Roger Rabbit by author Gary K. Wolf. Some of the elements changed for the film version but a lot of the characters remained, such as detective Eddie Valiant, the seductive Jessica Rabbit, and her husband, the famous Roger Rabbit. While in the last few years there seemes to be less attention given to our beloved characters, there have been notable accomplishments along the way. Let's take a look...

Who Framed Roger Rabbit made its debut on June 22, 1988. It was a critically acclaimed movie that convincingly blended live action with beautiful and fluid animation. The film was nominated for 6 Academy Awards, winning 3 of those (Best Film Editing, Best Sound Editing, Best Visual Effects) and a Special Achievement Award was given to animation director, Richard Williams.

Much like the novel it was based on by Gary K. Wolf, the film was unique for both its genre and for Disney. The film, while featuring animation, was made for an older audience. However, it crossed over to a younger audience in merchandising and therefore attracted all ages.

Mickey Mouse celebrated his 60th birthday in 1988 and had an animated television special which featured Roger Rabbit.

Roger Rabbit was added as a walk-around park character by the end of 1988.

On May 1, 1989 the Disney-MGM Studios was opened in Florida and featured a Roger Rabbit-themed section of the park featuring props from the movie, sounds effects, photo opportunities with Jessica Rabbit

Roger, Jessica and more characters from the movie were heavily used in print and marketing materials for Disney.

In 1990 The Disney on Ice show featured a segment which included Roger Rabbit, Eddie Valiant, and the first ever live appearance of Jessica Rabbit.

In 1990 Roger Rabbit had his own comic book series featuring a new detective, Rick Flint, helping Roger and his friends. This lead to a new version of the comic, Roger Rabbit's Toontown, that featured three shorter stories in one book that usually focused on Roger, Baby Herman, or Jessica.

In the early 90's Roger Rabbit had his own comic in the Disney Adventures Magazine. Roger and Jessica had been featured on three different covers.

There were several books created by Gary K. Wolf after the movie, Who P-P-P-Plugged Roger Rabbit?, The Road to Toontown, and Who Wacked Roger Rabbit?.

January 24, 1993 saw the opening of Mickey's Toontown in Disneyland, based off the Roger Rabbit movie. The following year on January 26, 1994 the Roger Rabbit's Car-Toon Spin ride opened where guests can roam the dark alleys of Toontown before hopping into a cab in an effort to help Roger save Jessica from The Weasels.

In 2003, during the beginnings of what's known as the Official Disney Pin Trading era, Jessica Rabbit became one of THE most popular characters to be introduced to pin collecting. With several new costumes, holidays pins, event pins and cosplaying as other Disney characters, Jessica now has around 700 pins released as of this date. 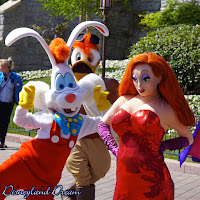 On May 24th, 2013 Jessica Rabbit made her first ever park debut in Disneyland Paris for the Disney Dreamers Everywhere event. Though this masked version of her was not liked by the majority, she made a second appearance at the Disneyland Paris 25th Anniversary event featuring 150 Disney characters included in their Grand Celebration and Character Cavalcade Parade.

Who Framed Roger Rabbit is a movie that still entertains and amazes audiences. With the upcoming Wreck-It Ralph movie, it would be great to see these characters included in what looks to be a big Disney crossover event, much like Roger's movie served as 30 years ago!