The big news this week was the announcement of Harrison Ford reprising his role in a fifth installment of Indiana Jones, schedule for release in 2019. The rights to Lucasfilm properties, like Indiana Jones and Star Wars, was bought by Disney in 2012 for a whopping sum of $4.06 billion. Steven Spielberg has signed back on to direct the new movie and there hasn't been much more information past that. The surprise that might be evident to some fans is Spielberg's sudden return to Disney after a long break-up that occurred after making Roger Rabbit.

Michael Eisner was brought on as the CEO of Disney in 1984. He is known for bringing about the Disney Renaissance (the return of successful 2-D animated movies), revitalizing Touchstone Films, producing TV shows such as The Golden Girls and the animated Disney Afternoon cartoons, starting a deal with The Jim Henson Company, starting the limited release of classic Disney movies on VHS, and creating the Disney-MGM Studios. It was Eisner who saw the potential in the Roger Rabbit movie and put it back into production after it had been shelved in the mid 1980's.

Spielberg was brought on as executive producer of Roger Rabbit, with friend Robert Zemeckis directing. It was Spielberg's influence that secured the use of Warner Brothers' characters in a Disney movie. The film was a big hit and put plans in motion for more animated features, such as The Little Mermaid. Roger Rabbit was also featured in TV spots, short cartoons, merchandise and in park expansion plans. While the exact details about the separation of Disney and Spielberg's Amblin company isn't clear, Roger Rabbit and co. took the back seat around 1993 when both companies (each owning 50% of Roger Rabbit rights) parted ways. Over the last 22 years many things have changed for both Disney and Spielberg. In 2005, Disney took on a new CEO, Bob Iger. Spielberg went on to co-create Dreamworks (Saving Private Ryan, Gladiator, Shrek) and continued directing many critically acclaimed movies as well as producing entertaining cartoons like Tiny Toon Adventures and Animaniacs. 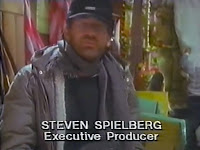 In 2015 Disney distributed the Spielberg directed Bridge of Spies which starred Tom Hanks. If I'm correct, this was the first time Disney and Spielberg worked together since the time of the Roger Rabbit cartoon shorts in 1993. The BFG (Big Friendly Giant), which involves Spielberg and Roger Rabbit producers Kathleen Kennedy and Frank Marshall, is another project with Disney that is set for release in summer of 2016. The news of another Indiana Jones will see the trio working together again with the Disney company. Though this might not be Roger Rabbit news, it's great seeing that the passing of time has brought back the teaming up of Spielberg and Disney.