Some Jessica Rabbit pins aren't just well known for how good they look - or how limited they are, but also for the backstory of how they were lost... and then sold years later. What's all this about? Read on to find out more!

Some time after the turn of the millennium Disney partnered with eBay to create Disney Auctions - an online auction outlet for everything Disney. They started by offering high end items like old park ride vehicles, costumes, props, or posters. Eventually they moved on to their own line of merchandise - more notably Disney Pins. Jessica was one of those special treatment characters at the time getting lots of attention in pin form, and by 2006, it was getting hard to keep up. On September 28, 2006, the Roger and Jessica Rabbit Mechanical Jumbo finished its auction and all 100 pins sold for $42.42. Unfortunately, auction winners soon got an email from Disney stating that these pins were lost, so accounts would not be charged. I can't fully recall, but I believe they did say if the pins were found, the winners of the auction would be notified. That, however, never did happen. Disney Auctions came to a halt later that year, and when the pins were found in 2007, they were sold for $24.95 each on the Disney Store website without any warning or notification. 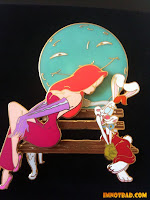 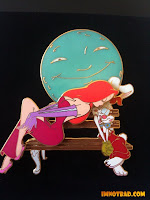 Enough about all the backstory - though it was enough to anger many customers at the time - if you were lucky enough to get this pin, it's definitely one of the great ones. Jessica is in all her glory, sitting next to Roger on a park bench. Roger has kisses all over his face and looks as bashful as can be. The "mechanical" element to this pin is that Jessica is a pin-on-pin and can be moved toward Roger to give him a smooch. There isn't anything necessarily mechanical about this. There are no springs or anything to create movement. You have to move Jessica back and fourth into place - though it is a cute touch for a pin. 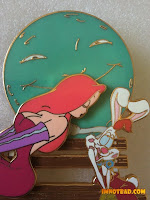 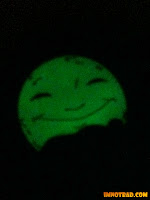 Another added element to the pin is the big blue moon behind Jessica and Roger. He is all smiles as the toons share a kiss - but when your lights go out, the blue moon glows a bright green. With such a large area like the moon, the glowing fill effect really pays off. The entire pin is almost 3 inches tall, and is one of the more larger pins usually offered by Disney Auctions at the time - thus making it a jumbo pin. 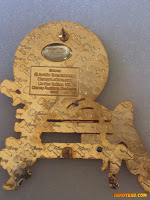 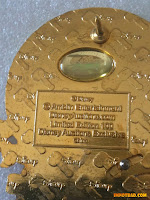 To help combat any usage of scrapper or counterfeit pins, the backs had a gavel and Disney logo pattern throughout, and also a hologram with the Disney Auctions logo. The hologram was more like a plastic bead, not just a plain hologram sticker slapped on the back. The artwork and quality of the pins from this time period always kept peoples interest and had them coming back for more, but the poor customer service started to take it's toll on everyone - and the hay day of LE 100 Disney Auction pins, which seemed to just be starting, sadly came to an abrupt end. 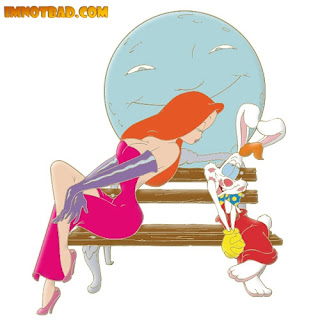 The Jessica and Roger Mechanical Jumbo Pin gets a 5! This is a great pin with its added fun factors, like movement and glow fill. If you were lucky enough to get this, it's a keeper. Though if you took part in buying Disney Auctions Pins - you surely haven't overcome many frustrations.