When it comes to Jessica Rabbit food-related items, the list is extremely short. There has not been any Jessica-shaped candy, but she has appeared on several containers. Now, she has her own line of chocolate! 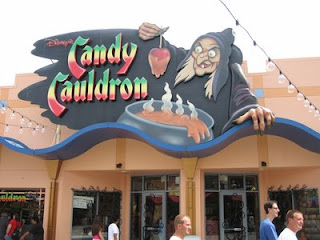 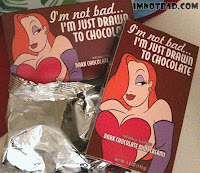 Jessica Rabbit has appeared on shirts, hats, mugs, beach towels - and even the occasional candy container. However, she now has her own line of candy - called I'm not bad... I'm just drawn to chocolate. Jessica Rabbit & chocolate lovers can enjoy being drawn to this for many reasons. Jessica Rabbit herself is posed on the box, and she offers her very own brand of chocolate! 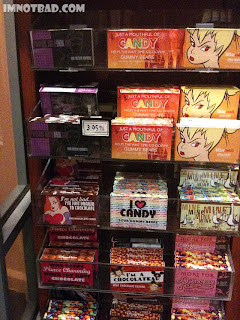 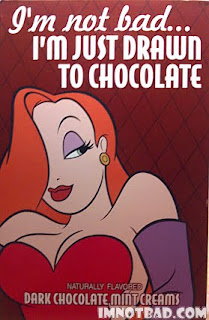 The Jessica Rabbit chocolate is available at Disney's Candy Cauldron store located in Downtown Disney, but it had been widely available in several Disneyland and Disney World park candy stores. The Jessica candy was first released around February of 2011 - and surprisingly is still selling in many Disney park locations. There are also other character who have their own line - like Tinker Bell's Bitter Sweet Lemon Drops, The Evil Queen's Everyone Has A Dark Side Chocolate Nonpareils, and Mouseketeer I'm A Chocolatear Chocolate Covered Raisins - each selling for $3.95 a box. 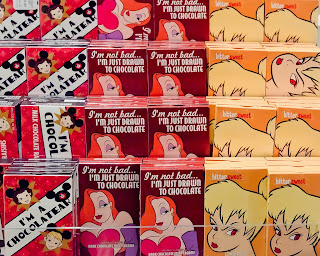 The candy is not shaped like kisses or anything fancy. They are simple chocolate blobs which are sealed inside a foil wrapper inside the Jessica Rabbit box. There is chocolate on the outside and a mint flavored white creme inside - much like Junior Mints or a Peppermint Patty. There are about twenty or so chocolate pieces in each box, and each piece is a delicious combination of mint and chocolate. Jessica Rabbit is only on the box, horizontal one one side and vertical on the other - both with the I'm not bad... I'm just drawn to chocolate title. The image of Jessica on the box has been used before for her Cinnamon Mints candy - but it's a great photo and the art is very bold and colorful. So, other than the box art, the candy itself does not really have anything to do with Jessica Rabbit. 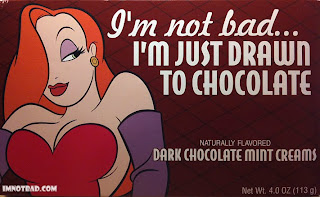 The Jessica Rabbit I'm not bad... I'm just drawn to chocolate dark chocolate mint creams get a 3½. They are delicious, if you like mint and chocolate. It might not be a taste for everyone - and it would have been cool if the candy was in the shapes of lips or hearts.