As a rising star in the art world, Tim Rogerson casts his artwork with a very evident energy and passion, inspired by the works of Picasso and Matisse.

While studying at the prestigious Ringling School of Art and Design, Mr. Rogerson gained a reputation as an upcoming artist and influence in his own right. In 2009, Mr. Rogerson was named Official Artist for Disney's first ever D23 Expo where he created his most ambitious work to date, "In The Company of Legends," which now sits in the Disney vault as a piece of Disney history.

Learn more about Tim's unique style from the master himself, how he began to work for Disney, and why it took some time to get his first Jessica Rabbit piece approved.

ImNotBad:
Do you remember what inspired you to become an artist?

Tim Rogerson:
My Dad could draw Mickey really well when I was kid. He shared an office with Disney artist Don "Ducky" Williams and he taught my Dad how to draw the Fab 5. I thought it was the coolest thing ever that my Dad could draw Mickey and I would beg him at least 10 times a day to draw Mickey for me. Then, one day during my kindergarten class, it was parent work day and of course I told all the kids my Dad is better than your Dad because he can draw Mickey. And that brought on a "how to" draw Mickey lesson right there in class and that was the first time I ever wondered, could I draw Mickey to. Minutes later I had my blank sheet of paper with a #2 pencil drawing crooked circles and eventually I drew my very first Mickey. I've been hooked ever since! 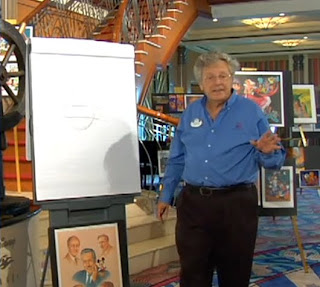 INB:
As a child, which Disney film inspired you the most, and why?

Tim:
When I was 10 years old, I saw the making of the Lion King on the Wonderful World of Disney. It was the week before the film was released in theatres and I'd always been a big fan of Disney animated films. We had every VHS at home and I watched them religiously as I learned how to draw the characters. But I never knew the process of animation so watching this documentary, I'm instantly blown away that here's a job where I can draw and make cartoons at the same time. No joke, the next day I sent a letter to the animation studio asking for a job. And then, the next weekend, the epic Lion King film is released and it was AWESOME! From that moment, I couldn't wait to grow up and be a part of it!


INB:
What was your reaction to the film, Who Framed Roger Rabbit, and its characters?

Tim:
Who Framed Roger Rabbit is one of those films that every time I watch it, I'm more and more impressed with it. The film came out when I was 6 so I didn't fully understand what I was watching. I remember being terrified at the end with Judge Doom, those crazy eyes and the moment he's flattened to then get up and walk. Terrifying for a 6 yr old, but as I got older, I loved it more and more. Jessica Rabbit was just another cartoon character when I was 6 years old, but at 16, Jessica Rabbit was then hottest cartoon character ever drawn. And now, watching the film as an artist, it's one of the most impressive animated films of all time. 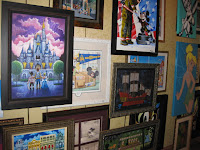 INB:
How did you start working for Disney?

Tim:
It was the summer before I started Art School and I worked full time at Walt Disney World in the Main Street Gallery of the Magic Kingdom. It was a cool job for me because I got to stare at Disney fine art all day which is a total trip to think about because I now have my fine art hanging on those same walls and all those Disney artists who were my heroes are now great friends. And during that summer, we had a signing event at the gallery with Disney legend, Ralph Kent, who was a Animator, Imagineer, and currently was senior artists at the Disney Design Group. I got to spend a few hours with him and I mentioned I was going to art school and hoped to work for Disney afterward in animation. He then put me on the spot and asked me to draw for him. So nervously with my hands shaking, I drew Mickey and to my disbelief, it was the best Mickey I've ever drawn, and so, Ralph was very impressed. He then invited me up to the Disney Design Group and he set me up with a part-time art job at Disney as a character show artist, where I sat in the Disney galleries behind an animation desk and drew Disney characters all day long. And I did that for four years on the weekends while I went to Art school. It was the perfect set up for me to get better at drawing Disney characters and meet all the right people.


INB:
What was the first piece you created for Disney?

Tim:
When I met the directors of Disney Fine Art, they really liked this small painting I did of Mickey with tons of bold bright colors. At that time, they only published artists who had rich history with Disney like Peter Ellenshaw and James Coleman, or artists who were very successful in the fine art industry. So for me, this 19 yr old art student, didn't seem like a possibility, but I went for it anyway. They asked me to recreate that small Mickey on a larger scale as a test to see if it works. Instead I painted 5pieces of the whole Fab 5; Mickey, Minnie, Donald, Goofy, and Pluto. I shipped all 5 paintings to them on a Wednesday, and by Friday, all the directors flew back to Orlando from LA with a publishing deal in hand.

INB:
How did the idea to create Jessica Rabbit artwork come about?

Tim:
I've painted Jessica Rabbit twice so far. The first piece was years ago and was inspired by a Jazz piece I had painted of a sexy singer. Right away, I knew I had to do a Disney piece with Jessica Rabbit. And the funny thing was Disney didn't approve the piece for the longest time because it was too sexy. I remember arguing, that's the point, that's why Jessica Rabbit exists. Finally, it was approved and published, and has been a huge hit in the galleries. I've even seen tattoos of that piece. What a compliment for someone to permanently ink your art on their body.


INB:
How long did it take to create your latest Roger and Jessica Rabbit artwork?

Tim:
The latest Roger and Jessica piece took about a week from sketch to finished painting. I'd always wanted to do a piece with Roger and Jessica together and I finally found the time to do it. My style of painting has evolved over the years and about 3 years ago I painted a piece called "Micasso" which changed my style completely. It's much more of cubist inspired style which really magnifies curves and shapes. Perfect for Jessica Rabbit! 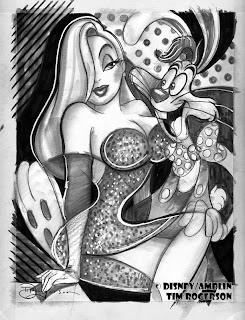 INB:
Can you describe the process and inspiration for it?

Tim:
The first part of my process is always the sketch, making sure everything fits together in the most interesting way and looks awesome in black & white. After the drawing is completed, I then transfer that drawing to canvas where I begin painting in oils. The way that I paint is kind of like sculpting where I'd paint a base color first and will then carve out the darks and lights, going back and forth till it works. 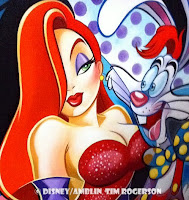 INB:
What seems to be the real opinion at Disney of the Jessica Rabbit character?

Tim:
She's definitely a sex icon like Marilyn Monroe. Everyone knows that, especially Disney. But it's a tricky thing for Disney because it's a family friendly company. When you walk around all the artists studios at Disney, you'll always find a sexy Jessica Rabbit drawing on the walls. 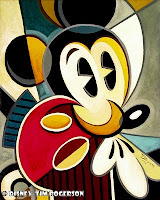 INB:
What are some of your favorite pieces that you have ever created?

Tim:
"Micasso" was a big painting for me because I had a bit of a painter's block for a couple months where I didn't know where to go next with my Disney art. I knew something was missing and my Disney art wasn't challenging me as an artist. I then saw this documentary on Picasso and was totally inspired by the Cubist movement. Micasso was born minutes later and I've been ROCKIN' ever since. I feel my biggest accomplishment was "In the Company of Legends" which was the official art for the first ever D23 Expo back in 2009. It was a huge honor to be chosen by Disney to do this and freaked out right away after a conference call with 20 directors who all wanted their own thing in the art. I made this giant list of all the directors wants and then somehow, put it all together in this epic composition that came out so great. The painting Gods were with me for that project. The original oil painting actually sits in the Disney archives so I officially have a piece of Disney history. Pretty Cool! 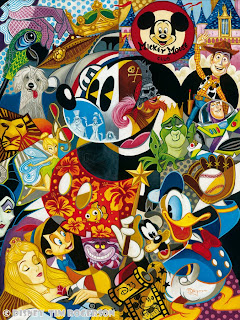 INB:
Do you have any other Disney or Jessica Rabbit pieces in the works?

Tim:
I'm always painting new Disney fine art and always looking forward to working with Jessica Rabbit again. I've been working on this huge collection where I want to paint every Disney film in the order of their release date. Each painting being filled with all the characters and story elements that make that film special. So far, I've painting Steamboat Willie, Snow White, Pinocchio, and currently working on the 1940 Fantasia. It'll be 10 years before I catch up to Tangled, but eventually I'll get to Who Framed Roger Rabbit and it'll be a big one filled with all the characters and story elements. It'll be the one to beat! 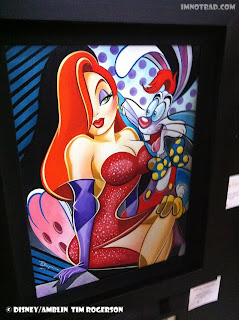