The list of quintessential Jessica Rabbit collectibles from 1988 is rather short. There were some shirts, the flexie doll, a PVC figure - and then there were the infamous Jessica Rabbit Pressers. What was so infamous about them? Read on... 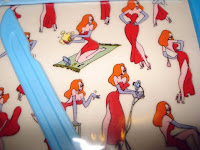 Back when Who Framed Roger Rabbit was released, the main focus on merchandise was Roger himself. Very little was released with Jessica, and most times you would see her along side him when something was released. It's funny how time has certainly changed that! One of the few sole Jessica items is the Jessica Rabbit Pressers. 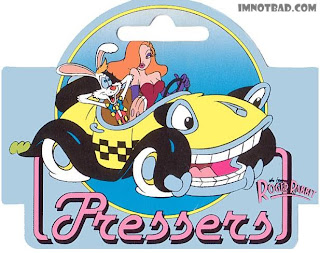 Many of you might recall these types of "stickers." They were actually rub-on transfers. The images were on a plastic sheet. With use of a coin (or unless it included a wand like the Disney pressers did) you put the pressers face down on paper, and would rub it with the wand. It would come off the plastic sheet and remain on the surface you applied it to. 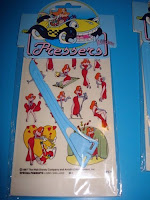 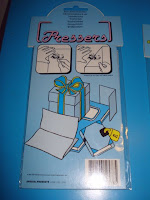 There were fourteen different Jessica images per sheet (her look seemed to be toned down a little) and only one of them images included her kissing Roger - making it a fairly uncommon item to really give the attention all to her. Most images were fairly new and even not really used anymore. Jessica applying make-up on the beach, Jessica holding a rolling pin?!, Jessica with a boa, and Jessica with her dress lifting up like Marilyn Monroe. 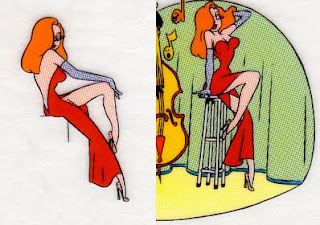 What exactly is so infamous about them? Well, I'm not sure if I have been making some of that up all along - yet I recall being told either the pressers sold out fast or were pulled off the shelves. It's hard to remember from so long ago, but one thing I kept hearing was that Jessica was too shapely for Disney. This seems to contradict the fact that they gave her a Jessica Rabbit store, so perhaps that's just something I believed at the time. Nevertheless, one can't deny the curious way they presented Jessica sitting with one leg up (above, left). It seems one of the lines was drawn a bit too long - making it appear that her - well, you know how it appears. The other image of her with a leg up makes an odd alteration to her dress in an effort by the artist to combat any thought that there may be some exposed areas (above, right). This is what obviously had to make it difficult on Disney with such a character. Ample bosom, tight dress, lots of curves. It's a wonder how the design for her was approved at all. So, when it came to merchandise, it was probably easier to use the character as little as possible and alter her design when necessary.

Above are two version of the Jessica Rabbit pressers that I enhanced. The small comic book-like dots are taken out and they have been recolored. I also added a color variation. They are in high quality so you can save or print them too! 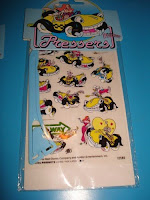 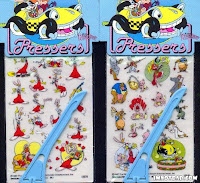 The Jessica Pressers were not alone however. There was also a set of Benny The Cab, Toontown characters, and Roger of course. I did have these when they originally came out but used them eventually. Luckily I found them all on eBay - except for Roger - selling for a really low price. I do not seem them on there much lately and I have no doubt they will all be on the list of rare items in the future.

The Jessica Rabbit Pressers get a 4. There isn't much to not like about them. Lots of awesome Jessica images rarely seen. I'm not sure how these will hold up over time though. The best thing I could think to do with them was open them and scan them high quality as they are not like stickers, are fragile transfer images and cannot be reused.