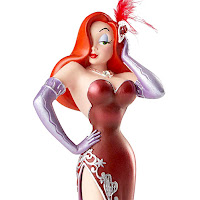 In 2015 the first Jessica Rabbit Couture de Force statue was released, to great surprise. The collection had quickly gained in popularity since its debut in 2013 and Jessica was a perfect fit. These statues have ranged from characters in their most memorable ensembles with accentuated details, to characters reimagined in new and stylish outfits. Let's take a look at the newest Jessica statue coming this summer... 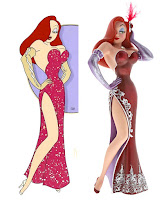 This statue is being labeled under the Disney Showcase Collection. It definitely is in the inspiration of what we know as the Couture de Force line, but it looks as if they may not be continuing on with that name. First off this statue looks absolutely gorgeous. While I love seeing added details and plussing, I almost wish this had simply been a no-frills statue of her. This pose is based on a Jessica poster from the 80's and reproduced in three-dimensional form perfectly. These are most likely the prototype images, however these statues tend to look like the final production pieces released. Jessica Rabbit is standing with one hand on her hip and the other on her hair. Finally, a new pose! 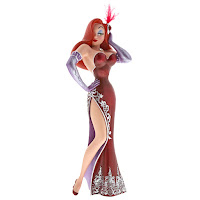 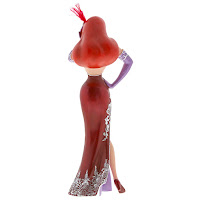 Her dress is a deep red with silver trim. There are silver embellishments on the bottom and slit of her dress. Her purple gloves are pearlized and have some added silver detail. She is wearing a small silver hairpiece accented with a red rose and plussed with a red feather. She also wears a necklace plussed with a crystal gemstone.

The whole statue will be over eight inches in height. Typically there are no edition sizes for these and they can be purchased in a wide variety of places. Currently BigBadToyStore is taking preorders for this piece, which is scheduled for release in June of 2019 and selling at $74.99 (though prices may vary at certain retailers). 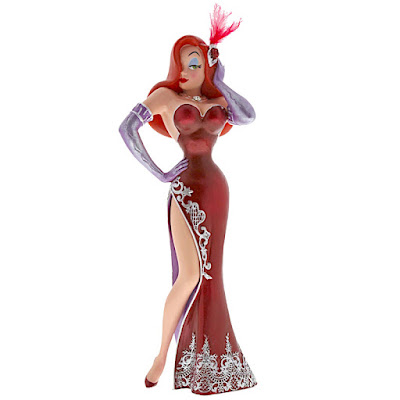