Don't forget to check the ImNotBad Twitter feed to the right for photos and info: 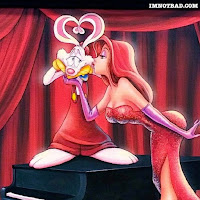 D23 is officially underway, with all sorts of new things already revealed. From dolls and artwork to a closer look at the new Star Wars land, there has already been plenty to see with the weekend only just beginning! Check out some photos of the new Designer Collection and 17 Inch Dolls and a video of the scale model of the Star Wars themed area with a possible name reveal... 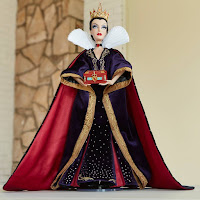 The upcoming Snow White 17 Inch doll collection has been revealed at D23 2017 and will be released on August 1st. This is the second time a Snow White doll has been released in the Heirloom Collection style. She was the first ever 17 inch doll released back in 2009, long before these dolls became very popular. At that time she was the only character from the movie available which left out the Evil Queen. Now, here she finally is in stunning 17 inch scale. As with most of these dolls her dress is a bit re-imagined. She still has the purple gown with long sleeves, but her dress is a deep v-neck and she does not have her black head covering. Instead she now wears a choker. Her face likeness is very accurate with dramatic makeup and rooted eyelashes. She has a high white collar and long cape. Her dress is embellished with gems and embroidery and she is holding the box she gave the Huntsman for Snow White's heart. She's topped off with a jeweled crown. She will sell for $119 and is an LE 4000.

Snow White is wearing her rags from the wishing well scene. While she doesn't appear to have any gems, the dress does feature embroidery work. She has a grey blouse, lace-up corset, red shawl, tattered over skirt and apron with a blue dress underneath. She also holds a white bird in her hand. She will sell for $119 and is an LE 6500. The Prince has the newer face mold similar to his 12 inch designer doll, but now with rooted brown hair. He is accessorized with a short cape and sword. Some of his outfit appears to be a faux leather and there is some embroidery detail. He will sell for $119 and is an LE 3000. The Platinum Collection returns once more with a set that features Snow White and The Prince in different outfits. Snow White wears a dark red velvet-like dress with long sleeves and lace up blouse. The Prince has a black faux leather uniform and long bright red cape. The both feature gold embroidery. This set usually sells for around $700 and is an LE 650.

There were two D23 Exclusive 17 inch dolls available to buy today. One is Snow White, in her iconic blue and yellow dress. This is different from the original doll that came out in 2009, and also looks different from the Shanghai version which came out more recently. She was a Limited Edition of 1023 The other exclusive was The Witch, wearing tattered clothing and holding the shiny poison apple. She was a Limited Edition of 723.

The new Designer Collection was on display, three of them were D23 Exclusives: The Blue Fairy came with Pinocchio and several accessories like Cleo, Jiminy Cricket and Figaro. Mulan was released in her long-awaited warrior gear along with Shang and a Mushu accessory. Pixar Animation even had their own set with The Incredibles, a young Mr. and Mrs. in their early attire. Elastigirl has rooted hair and both are fully articulated dolls for the first time in many years.

A set of the five limited edition dolls will be available at Disney Store locations and DisneyStore.com each limited to an edition size of 6,000 and selling for $130:

Jessica Rabbit has some fan appreciation and her merchandise is showing up at many booths around the convention however there is a new piece by artist James C. Mulligan for sale at the event. Some Bunny to Love is a Limited Edition of 1500 and selling for $125. The artist is also present at the convention for signings. 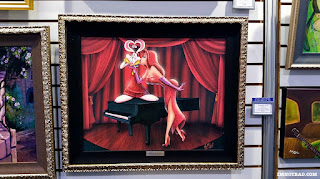 Guess who my mystery character was ❤️💋 Instead of her classic fuchsia sequin dress I decided to do her wedding attire you see in a photo during #WhoFramedRodgerRabbit 💍 Expect more HQ photos soon! #jessicarabbit #d23 #d23expo #jessicarabbitcosplay #cosplay

Lastly, here is a short video of the model for the new Star Wars land, scheduled to open in Disneyland and Walt Disney World in 2019. UPDATE: It appears the new land might be called Star Wars: Galaxy's Edge thanks to Reddit readers and /Film who found it through searches.