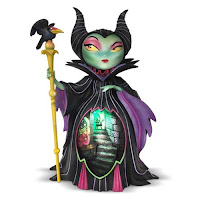 Back in 2013 a new artist quickly got my attention with her unique style and signature character designs. I knew from her skillful technique and playful approach that she was going to be noticed and get a sprinkling of fairy dust that makes wishes come true. Scheduled to be released the Summer of 2017 will be The World of Miss Mindy statues, all created in her colorful flair.

I posted an article about Miss Mindy in 2013 when her ornate statues caught my attention. I instantly saw the immense potential in her imaginative recreations of Disney Characters. There have been many new artists who've added their works to Disney over the years, but what I could tell Miss Mindy had was the "it" factor. She has a marketability and style that translates into collectibles one could easily envision being sold on store shelves along with Britto and Jim Shore.

This summer, it looks like that will be happening! The World of Miss Mindy statues are scheduled for release in August of 2017 and the series kicks off with some stunning examples of her talent. Belle, Maleficent, Evil Queen, Snow White and Aurora will all be available as dramatic and dimensional "shadow box gown" collectibles. There will also be other character statues such as Tinker Bell, Mickey and Minnie, and Cheshire Cat. The smaller statues will include characters like Lumiere, Cogsworth, Grumpy and Dopey. Not to be overlooked, Miss Mindy had her own series of blind-box Vinylmation figures available in 2015. The result was an impressive use of her distinct style merged with the popular Mickey-shaped icon. 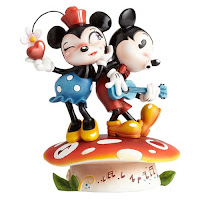 What could be next? I guess we'll have to wait and see. I do know where I'd like to see things headed for Miss Mindy - plush dolls, ornaments, and Designer Dolls based on her shadow box gown art that would totally reinvigorate that series. I believe her style can translate into many different collectibles and I am extraordinarily happy to see her artwork will be released very soon!


See The World of Miss Mindy Collection at Entertainment Earth