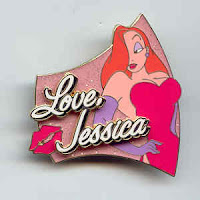 Coming in October will be two NEW Jessica Rabbit pins and one rerelease.

Sweetest Day, which began as a day to do good deeds for the underprivileged and forgotten, is now an occasion to celebrate the kind things people do for each other everyday. You can also give a gift to whoever you're "sweetheart" is. The Disney Sweetest Day Pin features Roger giving Jessica flowers who, in return, gives Roger a big kiss. It is a Limited Edition of 2000 and will retail at $8.50. This will be released in Walt Disney World on Saturday October 18.

Next is the NEW "Love, Jessica" pin. Jessica is in front of a glittered pink background and a raised "Love, Jessica" is next to her, making this a 3-D pin. Jessica's kissmark is nearby. Limited Edition Size of 2000 and will retail for $10.50. To Be Released in Disneyland on Wednesday October 22, 2003

Last is a RErelease of the Jessica, Patty Cake Lounge pin - Previously released in Disneyland - it will now be available in Disney World on October 27 and will retail for $6.50. This is an open edition pin.