Fun for all, and all for fun! 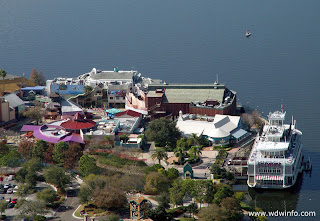 On May 1, 1989, conjoined with the opening of Disney's MGM Studios, a new nightclub attraction area called Pleasure Island made its debut. Located at Lake Buena Vista, it was also part of the Disney Village Marketplace shopping area. It was made up of some shops and various clubs. Once the sun went down, you had to be over 18 to enter and also pay a fee. This was the first Disney attraction to sell alcohol on its premises. Every night, up until 2005, Disney celebrated with a New Year's Eve style extravaganza using fireworks, a live performance and a countdown to midnight.

Disney made up its own folklore for the island's name, claiming Merriweather Adam Pleasure, nicknamed the Grand Funmeister, founded the island in 1911 and used warehouses for his business until he disappeared in the Arctic. A great storm hit after his absence and shut down the operations of the island. In the 1980's the site was discovered and converted into a new attraction in the memory of Adam Pleasure. A dancing moon-faced mascot was used as Pleasure Island's icon.

In reality, its name may just have been taken from the Pinocchio story of the island where children go and misbehave by doing adult activities, such as drinking and smoking, but, I'm sure that information would not have looked good in brochures. To popular belief, one big reason for the attractions construction was to compete with Church Street Station, an area of downtown Orlando which had several restaurants and nighttime attractions which brought in young adults. It's said that since the booming development over the years of the Downtown Disney area, similar to Universal Studios City Walk, the heyday of Church Street Station has passed.

Pleasure Island underwent major reconstruction in 2006 and still seemed to be lacking in the original spirit it once had. Attendance was dropping and many tactics were used to bring guests back in. It also became a free attraction, drawing in a lot of hang-outs, much to the dismay of many. The nightclubs located on the property though only admit those 21 and over. Some shops and buildings there remained vacant and the fabled story of Merriweather Pleasure had largely vanished. According to MousePlanet.com staff writer, Wade Sampson, the Jessica sign appeared to be "in a dumpster," but when I conducted an interview with the sign creator, Mark Marderosian, he said Disney still had it and at one point planned on putting it up for auction.

However, with wild rumors everywhere, Disney will shut down Pleasure Island for good today, September 28, 2008. It's unknown what Disney has in store for this area, but it's said they would like to have a better traffic flow between the Disney Village Marketplace and Down Town Disney.